Vaal University of Technology has been marred by allegations of poor management.
Image: Google Maps/Screenshot

Minister of higher education Naledi Pandor has had enough of the "serious governance and management challenges" at Vaal University of Technology (VUT), south of Joburg.

She has appointed former Unisa vice-chancellor professor Barney Pityana and National Library CEO professor Rocky Ralebipi-Simela to investigate problems at VUT and advise her "how to restore good governance to the executive management and the council".

The four-campus university has about 22,000 students and is one of the largest technical universities in the country.

The National Education, Health and Allied Workers’ Union [NEHAWU] has called for authorities and the minister of education to conduct investigations ...
News
3 years ago

Senior management has been writing to the minister since last year to ask for her intervention at the embattled institution. At the beginning of November, registrar Dan Mokoena and then director in the office of the vice-chancellor, Mpho Diago, asked Pandor to investigate the university and its council.

The university has been accused of failing to implement the recommendations of a forensic report into procurement irregularities - alongside a host of other claims, including the harassment of staff. The minister was also asked to look at issues undermining the "academic integrity of the university".

In response, Pandor asked the university council to investigate allegations of corruption and death threats.

Diago, part of the senior executive management, claimed in council meetings that he had received death threats when trying to stamp out corruption. Earlier his year, he left VUT with a R4m settlement after clashing with vice-chancellor professor Gordon Zide.

VUT senior official gets R4m payout after clashes with vice-chancellor

The breakdown in relations between the vice-chancellor of the Vaal University of Technology and a senior director has led to the latter walking away ...
News
3 years ago

Pandor has now intervened and written to the council to call for an independent team to investigate, warning that the current circumstances "undermine the effective functioning of the university".

Pityana and Ralebipi-Simela now have 90 days to investigate and report back to Pandor. They are tasked with looking into financial management and procurement practices, human resources, administration matters and any financial irregularities. They also need to verify all the forensic reports conducted since 2013. Some of these reports investigate security company tenders and questionable procurement practices.

Times Select reported last week that the council - the highest governing body of the university - is no longer able to hold meetings as it does not have the legally required number of people as required by law.

In February, the council's deputy chairperson Ulandi Exner wrote a resignation letter to the minister titled: "Allegations of maladministration by the vice-chancellor at the Vaal University of Technology".

Pandor responded to the letter, seen by Times Select: "It is indeed unfortunate that the disturbing developments at the university have [led] to your resignation and that of several other council members." 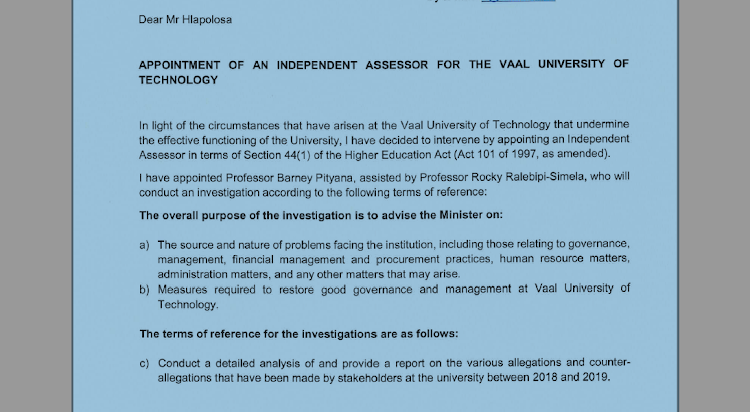 Pandor met with the VUT council in mid-April to discuss the allegations of corruption and the many resignations. In her letter about the investigation, she told the council chairperson that she would not approve the "council recovery plan" they submitted to her after the meeting.

"I have perused the plan and I have decided not to approve it, as I deem it insufficient to address the serious governance and management challenges that have arisen at the university," said Pandor.

VUT spokesman Mike Khuboni said senior university management had met on Tuesday but were not able to discuss the investigation as they had other matters on the agenda. The meeting on the independent investigation ordered by Pandor would be held on Wednesday.

"The letter [from Pandor] was tabled for discussion at today's [Tuesday] executive management meeting by the registrar. However, we did not manage to discuss this particular item as we had other items to discuss. The meeting had to be adjourned as the VC [vice-chancellor] and the registrar had to attend another urgent meeting, externally.

"I hope the meeting will resume tomorrow [Wednesday] and then the executive management will make a pronouncement."

Khuboni has previously said the vice-chancellor felt targeted by staff as he has tried to stamp out corruption at the institution and ordered forensic investigations into dysfunctional departments.

Pandor's spokesperson Lunga Ngqengelele said: "The minister has been concerned about the reports she has been receiving about VUT for some time. She has had several meetings with all the stakeholders to try to get to the bottom of what was going on, which yielded very few results.

"She has now decided to appoint an independent assessor, professor Barney Pityana, to investigate almost all the allegations the minister has been receiving and advise her on what should be done to bring back VUT to a sound footing."

Senior staff at Vaal University of Technology have called on higher education minister Naledi Pandor to intervene as allegations of fraud, death ...
News
3 years ago