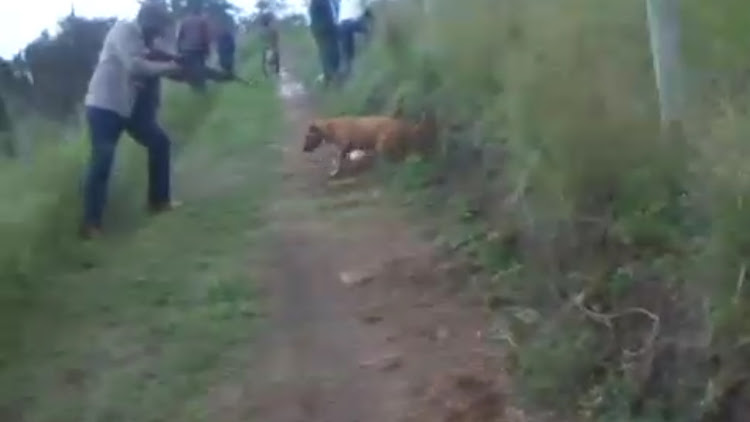 Mthonjaneni deputy mayor Phumlani Ntombela has been fined for animal cruelty after egging on his bodyguard to shoot a leashed dog multiple times.
Image: Supplied

KwaZulu-Natal politician Phumlani Ntombela and his bodyguard have been found guilty of the cruel shooting of a dog in the Melmoth area, the National Council of SPCA's (NSPCA) said on Friday.

The NSPCA investigated the case and laid charges against Mthonjaneni deputy mayor Ntombela and his bodyguards, Bongani Shabalala and Halalisani Biyela, after footage of the incident surfaced on social media in November 2017. It was brought to the attention of the Eshowe SPCA five days after the dog was shot.

The dog, writhing and crying in agony, was shot several times with a rifle in front of children.

In the video‚ a man with a rifle aims and shoots at the tethered dog on a pathway in a rural area at least four times, as the animal yelps in pain. When the dog finally dies‚ the bystanders leave. A young boy walks up to the animal and‚ using a knife‚ cuts off its leash. A second man in the video is seen holding a small firearm in his hand.

Judgment was handed down in the Melmoth Magistrate's Court on Tuesday, said the NSPCA.

Ntombela and one of his bodyguards, Shabalala, were found guilty of the act.

Ntombela was found guilty and sentenced to a fine of R4,000 or six months' imprisonment, half of which was suspended for five years.

His bodyguard was found guilty and sentenced to a fine of R2,000 or six months' imprisonment, which was suspended for five years.

The NSPCA's Meg Wilson said they were satisfied with the conviction, but not the sentence.

"Unfortunately sentences do not seem anywhere near adequate for the suffering that the dog endured, but two men, one of which holds a high political position, now have a criminal record.

"A strong message has been sent – no one is above the law and animals need to be treated with the greatest compassion," Wilson said.

The police and SPCA inspectors are searching for a man who dragged dog from a car and shot in a in a cul de sac in Winston Park, west of Durban, on ...
News
3 years ago

Cattle will suffer as support for SPCAs dwindles, IFP warns

The vital work carried out by the SPCA in rural areas has been highlighted by the Inkatha Freedom Party.
Politics
3 years ago