'Our taps have been running dry for years,' say Pietermaritzburg residents 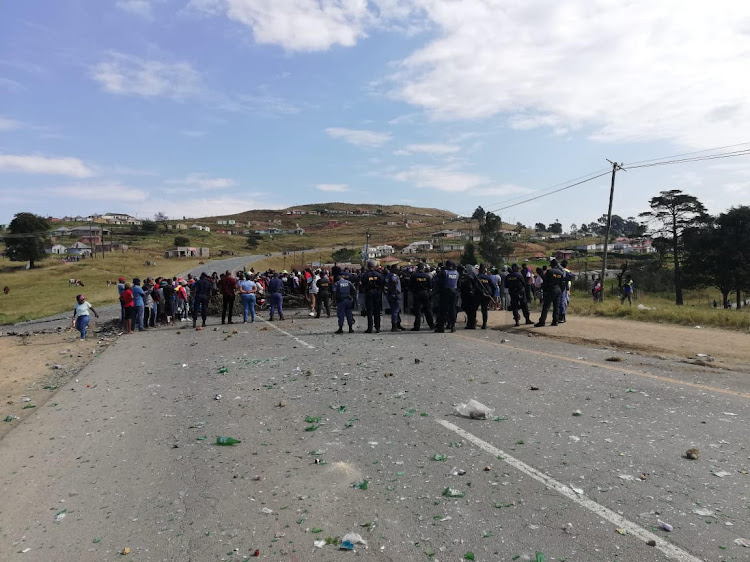 Khokhwane residents blocked the roads to the location on Thursday. They said several communities have been without clean drinking water for years.
Image: Nompendulo Ngubane

Khokhwane location in Pietermaritzburg was brought to a standstill on Thursday as scores of angry residents protested over a lack of clean water.

Residents from ward 39 say they have been living without a consistent supply of tap water for several years and demanded that Msunduzi municipality deputy mayor Thobani Zuma address their pleas.

Earlier, protesters had blocked all of roads to the location with burning tyres and large stones. Taxis were not operating and schools remained closed. Police also used teargas to disperse protesting residents but no arrests were made.

“There has been no water for seven years,” said resident Thabile Dludla. He said that on the odd chance when a water tanker came to the area, it only catered for residents along the main road.

“Our taps have been running dry for years. We drink water from dirty streams. Some of us have dug ditches so that we have water. We want [deputy-mayor] Zuma to come and tell us what the problem is,” said Dludla.

Protesting Maritzburg residents get lights and water after meeting mayor

Electricity and utility services have been restored at a Pietermaritzburg hostel following violent protests on Tuesday night.
News
3 years ago

Another resident Mary Sishi, 60, said: “I should be at home but I can’t let others fight for me. I have a tap at home but it’s been dry for years.”

Sishi said she often struggled to take her medication daily because she did not have clean water at home. “My grandchildren help me fetch water. It is a distance from our house,” she said.

In bid to quell tensions, deputy mayor Zuma arrived to address protesters while heavily armed police and private security watched. He acknowledged that there was a “huge problem” with water supply and promised residents that water tankers would arrive by Thursday evening. But by 9am on Friday nothing had arrived.

He attributed the scarcity of water to the “growing population of residents”.

Zuma said the municipality was building a dam that would supply enough water to surrounding communities.

“There are 23,000 low-cost homes that were recently built in Vulindlela. People have showers and flushing toilets. That alone increases the demand of water,” he said.

Zuma also promised to return to the area on Sunday to meet with residents and discuss a long-term solution.

Gift of the Givers, the organisation which drilled a number of boreholes in the Makhanda Municipality to alleviate the water shortage in the area, ...
News
3 years ago

Protest action has broken out across the Imbali township in Pietermaritzburg on Monday.
News
3 years ago

The Mhlathuze Water workers has been granted an interim interdict against its workers by the labour court.
News
3 years ago