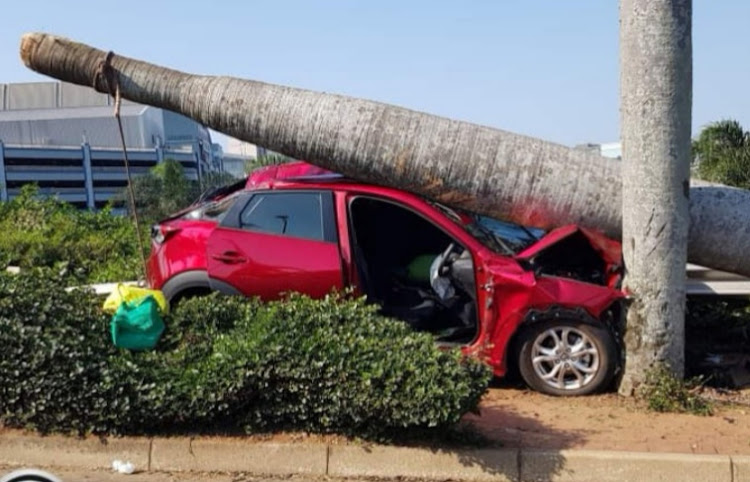 Two women were injured when their vehicle struck a palm tree in Umhlanga on Friday
Image: Crisis Medical

Two women cheated death on Friday when their vehicle crashed into a palm tree in Durban's plush Umhlanga suburb.

Lunchtime traffic came to a standstill while emergency workers attempted to free the elderly woman and a domestic worker from the wreckage.

Crisis Medical spokesperson Kyle van Reenen said the driver and passenger, aged between 40 and 70, had to be cut free with jaws-of-life at Umhlanga Ridge's Millennial Way.

"They were placed on to specialised stretchers used for the treatment and prevention of spinal cord injuries.

"They were transported to hospital under the care of intermediate life support medics.

Duduzane Zuma was questioned on Thursday on why he gave contradictory figures regarding the speed at which he was traveling when his Porsche collided ...
News
2 years ago

A bakkie and a car literally gate-crashed their way into the Kruger National Park on Wednesday evening within the space of just two hours.
News
2 years ago

A horrific accident between a taxi, a truck and a car left two people dead and 16 injured in Benoni on Monday morning.
News
2 years ago