It was political persecution by the NPA, argues Jacob Zuma's defence team 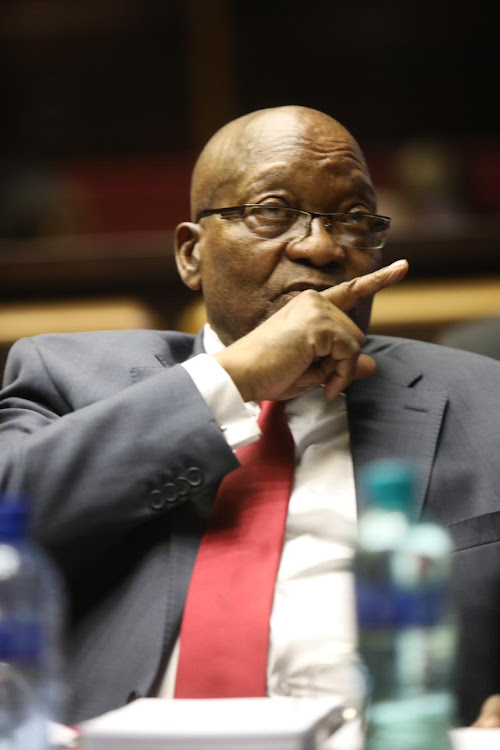 Jacob Zuma's legal team has pulled out what it believes is its trump card: an exceptional and extraordinary circumstance created by the National Prosecuting Authority.

Acknowledging that the delay in bringing Zuma to court was not enough to secure a permanent stay of prosecution, his lawyer, advocate Muzi Sikhakhane, explained that an extraordinary circumstance, which has to be taken into account, did in fact exist.

He said it was exceptional and extraordinary for an organ of state "as powerful as the NPA" to discuss a prosecution with political players.

"It is spectacular," said Sikhakhane, wrapping up the day's proceedings by claiming that the NPA was guilty of prosecutorial misconduct in its action against Zuma.

BusinessLIVE reporter Karyn Maughan updates us on the case in the Pietermaritzburg high court where former president Jacob Zuma appeared on corruption charges on May 20 2019.

Zuma should have been charged with Shaik, says his advocate

Where would former president Jacob Zuma be if he was charged with his former financial advisor Schabir Shaik?
News
3 years ago

He was referring to what was revealed in the so-called "spy tapes", which are recordings of phone conversations  between then NDPP Bulelani Ngcuka and former Scorpions boss Leonard McCarthy discussing the timing for prosecuting Zuma in order to boost the chances of Thabo Mbeki winning re-election.

"If you find that it's not unlawful ... to do what we say Leonard McCarthy and Bulelani Ngcuka did [and] is not against the spirit and provisions of our constitution, I must lose this case," said Sikhakhane.

"If you find that the NPA, from today and going forward, in pursuit of someone who's accused ... can do what Leonard McCarthy was doing - they can take instructions from the DA and the ANC and everybody in order to time things to suit political players - you are free to take that decision. I must lose this case, if this court does not find that violation extraordinary."

The defence believes that if the court grants Zuma a permanent stay of prosecution, it would prevent the NPA from abusing its power in similar cases in future.

Another member of Zuma's legal team, Thabani Masuku, told the court that the NPA admitted to violating Zuma's constitutional rights in its own affidavits - "and yet does not disclose the constitutional implications of this state organ's violation of an individual's rights."

Masuku added that even advocate Wim Trengrove, who is leading the state's case in opposing the application for a permanent stay of prosecution, had admitted the NPA's wrongdoing during a public lecture.

Zuma faces 16 charges, including fraud‚ corruption and racketeering. These relate to 783 payments he allegedly received as a bribe to protect French arms manufacturer Thales from an investigation into the controversial multibillion-rand arms deal. The alleged bribe was facilitated by Shaik.

Proceedings will continue on Tuesday.

Zuma is expected to address crowds gathered outside the high court.

Former president Jacob Zuma is back in the dock to face corruption charges in the Pietermaritzburg high court on Monday.
News
3 years ago

Security is tight at the Pietermaritzburg high court, with bodyguards at every entrance and exit ahead of former president Jacob Zuma's appearance.
News
3 years ago

Former president Jacob Zuma has vowed to show under-fire eThekwini mayor Zandile Gumede "the same support that she has shown me for the past decade".
Politics
3 years ago