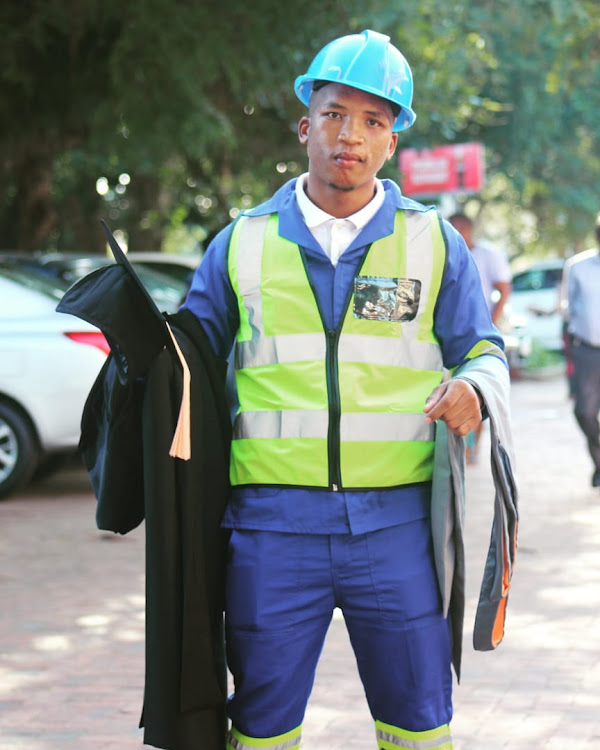 Mondli Xulu has three qualifications, yet says he is still trying to land an internship even if it is for R5,000 a month.
Image: Supplied

Just four years ago, Mondli Xulu was a trolley pusher helping people with their groceries for tips of R5 a time. Now he is an honours graduate in rural development.

Financial constraints dictated his inspiration for his graduation outfit - a pair of worker's overalls and a hard hat - at the University of Zululand last week.

"I won't lie, I had no money so there was no way I could afford to buy a suit, like people normally do," he told TimesLIVE.

"I spent R300 on the work suit. The boots and helmet were donated to me," he said.

He also felt the need to protest against unemployment.

"It was also about raising awareness about the scourge of graduate unemployment in our country," said Xulu.

The 23-year-old, who has studied with the help of the government's National Student Financial Aid Scheme and is now enrolled for a master's degree, said the decision to further his studies was influenced by the scarcity of jobs and the fear of staying home without work.

Born and bred in a rural area, Stanger in KwaZulu-Natal, Xulu is one of four siblings - all unemployed.

"The reason I posted my pictures online is to look for a job, so that I can support my poor family.

"I have been trying and trying with no luck. I am still looking, I will never give up till something comes my way," he said.

Speaking about his parents, Xulu said his mother died when he was in grade 3 while his father never supported them.

"We were really young when our mother passed away, my youngest sibling was about eight months old. We were literally raised by the social grants money, but we're getting older," he said.

Xulu, being the only male, said he had always felt obliged to financially support his sisters.

"I am a hustler by birth, I've always found ways of making a living, I've pushed trolleys at town, I've worked in retail, in a restaurant, and recently started a small business of hiring out gowns to graduates. I am from a poor, disadvantaged family, so I have no choice but to push," he said.

Of all the siblings, Xulu said he was the first one to obtain a higher education qualification.

"Being the first to have a diploma, it makes sense for me to provide for them, because unlike me, they did not have the opportunity to go to university," he said.

With his picture trending on social media since the graduation ceremony, Xulu said he was grateful for the shares, even though many were expressing concern at his outfit rather than his plight about getting a job.

While many graduates have set standards or salary expectations, Xulu said even a R5,000 stipend would be enough for his family to survive. 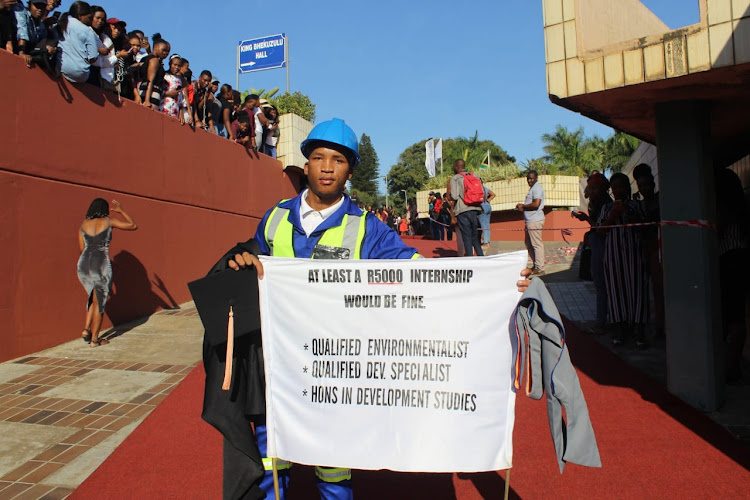 While he studies towards a master's degree, Mondli Xulu is looking for a job to help support his siblings.
Image: Supplied

'I felt like crying, dancing and clapping - all at the same time!' says proud aunt at UKZN graduation

Gabisile Mbatha couldn't contain her joy when her niece Nongcebo Khuzwayo graduated from the University of KwaZulu-Natal this week.
News
3 years ago