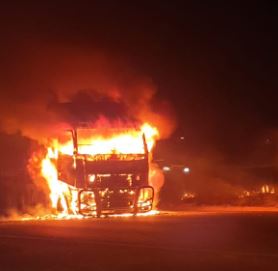 A truck was ablaze at Howick on Sunday night, emergency services shared.

The fire was reported just before 9pm.

The N3 toll concession operators said the route was cleared by 11pm.

Earlier, it confirmed a truck was on fire and that all lanes were obstructed to traffic, with motorists using ramps to move past the scene.

The cause of the fire was not immediately clear. Police were in attendance.

According to the SA Long Distance Truckers on Facebook, the truck was torched. According to a thread on their page, the truck had been parked near a squatter camp and its load of Defy appliances was looted.

The Road Freight Association said recently that based on incidents reported, some 1,300 trucks had been damaged or destroyed over the past year.

The association estimated the damage to property from destroyed trucks, trailers, the loss of labour, medical expenses and associated costs to be in the region of R1bn.

23h02 #VehicleFireUpdate: N3-4 12.8N (JHB bound) at Howick North/Tweeide I/C 107. The scene has been cleared. Thank you for your patience. Please drive safely.

Direct, deadly attacks on SA truck drivers are getting worse

Rocks being hurled directly at truck drivers is "something new" as a spate of attacks on the "soft targets" plays out on the country's roads - some ...
News
2 years ago

Another truck has been stoned in De Doorns in the Western Cape.
News
2 years ago

Looter continual: We rob trucks all the time, say schoolkids in De Doorns

Schoolchildren were among the looters who raided a truck on the N1 in the Western Cape after the driver was hit by a rock hurled from a footbridge.
News
2 years ago