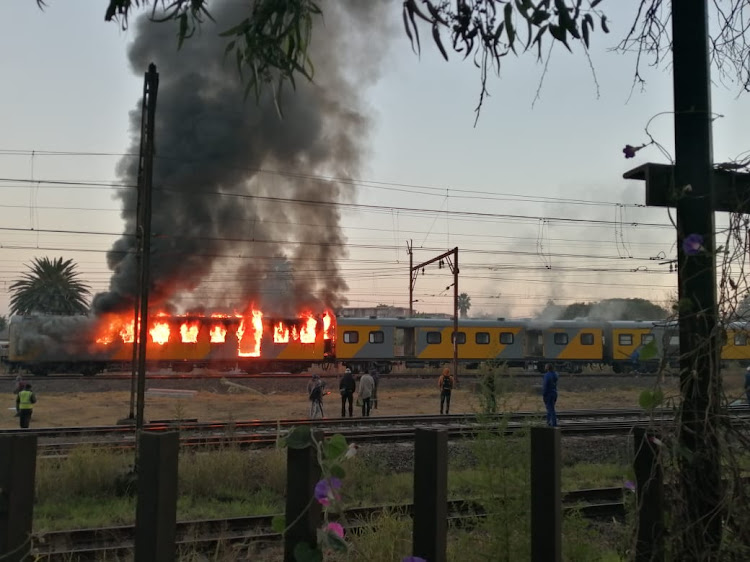 Passengers made a lucky escape after two train carriages caught alight at the Elandsfontein station in Germiston on Tuesday.
Image: ER24

According to paramedics, the blaze broke out early in the morning, with emergency workers arriving at the scene around 7am.

"Fire services had already begun to battle the blaze, which had broken out in two of the carriages," said ER24 spokesperson Russel Meiring.

"Emergency personnel set up a triage area and began to assess the passengers. Fortunately no injuries were found."

Fortunately, no-one sustained any injuries following a fire on two carriages on a train at the Elandsfontein Train Station in Germiston. pic.twitter.com/FWzeNNL5Mo

Metrorail has lost millions of rands in infrastructure in recent months, with numerous trains being set alight deliberately.

In one of the most recent incidents, coaches worth an estimated R33m were set alight in Cape Town.

Tuesday's incident in Germiston, however, was not the result of foul play. "It was an electric fault," said Metrorail spokesperson Lillian Mofokeng.

Regular train operations had resumed by 9am, she added.

A bitter dispute between the Passenger Rail Agency of SA (Prasa) and two unions is believed to be behind most of the arson attacks that have ...
News
3 years ago

'I don't know if I'll make it home.' Our country's train drivers live in fear

Thomina Mashiangsko is a train driver, single mother and sole breadwinner for her two children - but she would “resign today” if she found another ...
News
3 years ago

The president boarded a train in Mabopane at around 7.30am - but it was delayed by two hours. En route the train got stuck again.
Politics
3 years ago