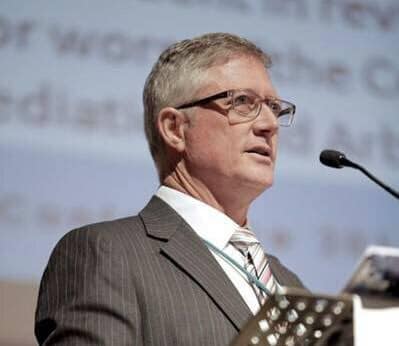 Judge Anton Steenkamp has died of a snake bite while on holiday in Zambia. He was 57.
Image: Saslaw via Facebook

A dream African holiday has instead become tragic loss for the family of labour court judge Anton Steenkamp, who has died after being bitten by a black mamba in Zambia.

"Judge Steenkamp was on long leave and travelling in Zambia when he was bitten by a snake and subsequently died," the SA Society for Labour Law said in a statement. He passed away on Monday.

"Our thoughts and prayers are with Judge Steenkamp’s wife and his family at this terrible time," the organisation said.

Its national president, Ludwig Frahm-Arp, commented: "Judge Steenkamp will be fondly remembered as an excellent judge and labour lawyer who contributed significantly to the development of our labour law jurisprudence. We are all deeply saddened at his death."

Tributes to Steenkamp, both personal and professional, are being shared on social media.

"This is a tragic loss of a balanced, humane and intelligent judge," said Ebrahim Patelia.

II Mahomed‏ said he had appeared in court before Steenkamp on many occasions: "A real gentleman and always a pleasure to have been in his courtroom. Will surely be missed by the legal fraternity. RIP."

A Durban woman got the shock of her life when a 1.9-meter black mamba slithered into her garden
News
2 years ago

Veteran journalist Eddie Botha recounted in a Facebook tribute how Steenkamp had been a progressive from his youth.

"I met Anton when he was a law student in Stellenbosch in the early 80s. He was one of a group of young student leaders, who an irate PW Botha threatened to have their passports confiscated should they travel to a neighbouring state to meet with the banned ANC," Botha recalled. "Unfortunately the then vice chancellor Mike de Vries capitulated to Die Groot Krokkodil and the students had to abandon what would have been a groundbreaking trip..."

As a law graduate, he worked for the liberal newspaper Vrye Weekblad, before joining the legal ranks.

Max du Preez, the publication's editor, tweeted: "I mourn the death of a very special friend, Anton Steenkamp. After his LLB he came to work for Vrye Weekblad because of his commitment to justice and democracy. He went on to become one of SA's youngest judges. Clever, kind, progressive man of great integrity."

Steenkamp, he confirmed, had planned to spend his long leave travelling back roads through several African countries. "His last pictures came from Zambia."

With the passing of judge Anton Steenkamp yesterday, South Africa lost a magnificent jurist, human being and citizen. In the process I also lost a friend. In the end your love of wild Africa killed you. If you could choose, you wouldn’t have had it any other way. Hamba kahle.

Having appeared before the late Judge Anton Steenkamp, on many occasions, I share the sentiment. A real gentleman and always a pleasure to have been in his courtroom. Will surely be missed by the legal fraternity. RIP https://t.co/AwULcGqCMV

Seven years after he made sexually suggestive remarks to a 13-year-old in his class, a Cape Town teacher’s attempts to clear his name have suffered ...
News
2 years ago

When the music takes you home

It was an unexpected delight to stumble across a group of Dutch tourists singing South African folk songs around a campfire in Portugal, writes Chris ...
Lifestyle
2 years ago

SANParks could toss curbs on boozing, rowdiness to attract millennials

Silence after 9.30pm has been the golden rule for generations of visitors to SA's national parks, along with strict curbs on boozing and rowdiness ...
News
2 years ago