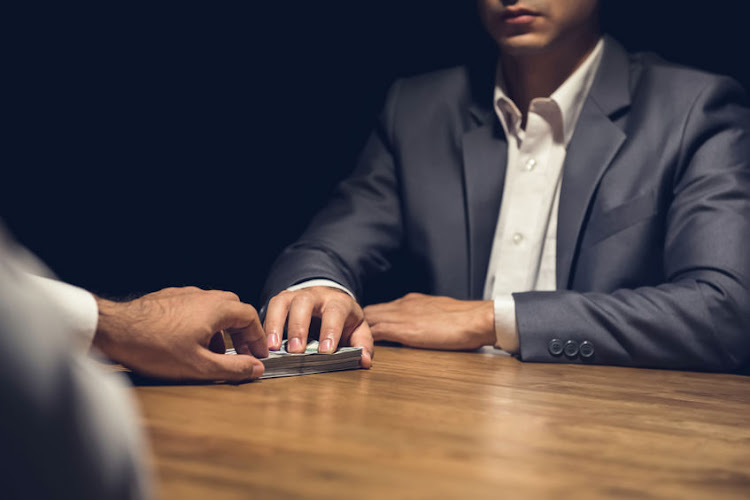 Four police detectives allegedly conspired to offer the victim of an alleged assault cash in exchange for dropping the charge.
Image: 123RF/kritchanut

Four police detectives faced a charge of corruption on Wednesday after allegedly conspiring to get an assault case against one of them dropped in exchange for cash.

The detectives, from Kirkwood police station, appeared in the Port Elizabeth Specialised Commercial Crime Court after being arrested earlier by the Hawks' serious crime investigation team.

The Independent Police Investigative Directorate is investigating the death of a man in Yeoville, Johannesburg, who allegedly shot at two police ...
News
3 years ago

"The alleged assault of the 51-year-old victim took place in the Kirkwood area and he subsequently opened a case docket at the local police station. The said case was assigned to Sgt Ferdinand Noonen for investigations."

The two sergeants and Hobbs allegedly visited the complainant at home and offered him money to drop charges against their colleague.

"The complainant eventually accepted an amount of R500 under duress, after the arrival of the investigating officer in the case, R400 of which was paid immediately, with an arrangement that the balance be paid at a later stage. A case withdrawal sworn statement was then prepared which the complainant was allegedly made to sign," said Ramovha.

The docket containing the withdrawal statement was presented to the public prosecutor's office and the prosecutor declined to prosecute the assault case.

About six months later information about what had happened came to light.

The four were released on R1,000 bail each and are expected back in court on June 21.

A father who did not want to continue paying maintenance after he retired as a teacher has been sentenced to life behind bars for arranging the ...
News
3 years ago

A court interpreter appeared in the same court where he works on Monday after soliciting a bribe from the family of arrested suspects last week.
News
3 years ago

A 47-year-old man who has been fraudulently practicing as a lawyer for several years has finally been arrested, the Hawks revealed on Tuesday.
News
3 years ago