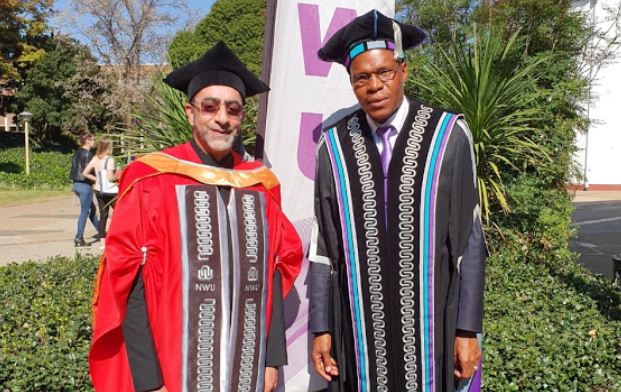 Gift of the Givers founder Imtiaz Sooliman has received an honorary doctorate from the University of the North West.
Image: Supplied / Imtiaz Sooliman

The North West University on Wednesday honoured Gift of the Givers founder Imtiaz Sooliman for his humanitarian work - but the humble physician, who is originally from the North West, said this award was about more than himself.

“This pays credit to all the people that work with me, all the donors, my teams. So those recognitions are not because of you but it is because of everything that everybody else has done,” he told TimesLIVE.

“It’s a recognition of my team and everybody else who supports us in doing the work,” he added.

The Potchefstroom-based university bestowed an honorary doctorate on Sooliman, which is reportedly his eighth, labeling him an “individual with extraordinary leadership traits who has made exceptional contributions towards cross-border and international cooperation”.

Humanitarian aid group, Gift of the Givers, will build 80 new homes for flood-affected families in Durban.
News
3 years ago

Sooliman said it was great for him to be acknowledged by a university in his hometown.

“I was born here. I left in 1974 and to be recognised by your own university in your own hometown 45 years after you left, it is a fantastic feeling,” he said.

“The university also wants to partner with us in disaster interventions, which is an additional bonus for us, so it is great feeling,” Sooliman added.

Listing some of his work, the university said in his humanitarian walk spanning over two decades, Sooliman had initiated 21 different categories of projects through his organisation, delivering R2.1bn of aid to people in 43 countries, including South Africa.

“He enriched his career by designing and developing the world’s first and only containerised mobile hospital in 1993. It was deployed in Bosnia and appraised by CNN as one of the best hospitals in Europe,” the university said.

“Gift of the Givers was the first foundation to receive R60m from a government to put together and roll out 204,000 food parcels. Dr Sooliman’s innovative groundnut-soya high-energy and protein supplement – a first globally – has played a major role in the treatment of HIV/Aids, TB, malnutrition, cancer and various other debilitating conditions. Africa’s largest open-source computer lab was also developed by him in 2007.”

Humanitarian aid group, Gift of the Givers, will build 80 new homes for flood-affected families in Durban.
News
3 years ago

While he has travelled to disaster-torn countries and helped saved scores of lives, Sooliman said his greatest achievement was that they had managed to cut across race, religion, culture, government and corporates.

“We have managed to blend everybody to work together as one South African in our agency. Medical work [is something] anybody can do, search and rescue [is something] anybody can do, but to do it across culture and race and work harmoniously, especially coming from an apartheid past where the country has been polarised,… and yet we represent a country with diverse cultures.

“The fact that we can work together and stand as a team, representing the country as one nation,that is a great thing.

“The world takes notice of us as Africa. The skills we impart… The world is forced to sit up and take notice,” he said.

And the world certainly has taken note of Sooliman and his organisation.

According to the NWU, he currently holds 121 individual and organsiational awards, including four presidential awards.

Humanitarian organisation the Gift of the Givers believes that SA photographer Shiraaz Mohamed, who was captured in Syria more than two years ago‚ is ...
News
3 years ago

Sooliman said he was already on a path to groom other people within his organisation to take over the reins from him should he one day wish to step down.

The 57-year-old, who qualified as a medical doctor in 1984 but left the profession to follow his calling of humanitarian work, admits however that he does miss practicing medicine.

“Sometimes [I miss it]. My daughter and her husband are doctors and when I see the medical teams work and when some people stop me and ask me for medical advice, my old patients when they see me… It was always my dream to be a physician,” he admits.

Sooliman however, says it is near impossible to think of going back.

“The work or demands of the Gift of the Givers is so huge and it is not only in the medical field. We are involved in water, agriculture, life skills, education and in so many diverse things,” he said, adding that he was content with where he was at the moment.

Gift of the Givers, the organisation which drilled a number of boreholes in the Makhanda Municipality to alleviate the water shortage in the area, ...
News
3 years ago

Humanitarian organisation the Gift of the Givers believes that SA photographer Shiraaz Mohamed, who was captured in Syria more than two years ago‚ is ...
News
3 years ago