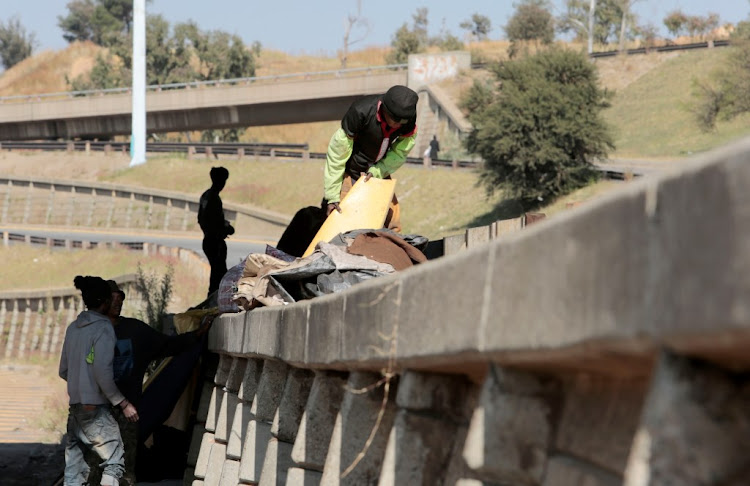 A homeless man packs his belongings when he sees Johannesburg Metro Police officers near the M2 bridge, which has been closed for repairs since February 2019.
Image: Sebabatso Mosamo/Sunday Times

The Johannesburg Roads Agency (JRA) says it will cost more than the budgeted R160m to rehabilitate the M2 motorway between the Crown Interchange and Maritzburg Street - but is adamant it will be completed by October 30.

However, it is unclear exactly how much the rehabilitation will cost as the agency has not yet made estimates on how much more is needed.

The bridge had been closed since February after Johannesburg mayor Herman Mashaba raised concerns last year over the stability of the Karzene and Selby sections of the M2 bridge, saying this posed a threat to road users.

The agency previously flagged its concern that of the 902 bridges managed by the city, only 6% were in good condition. It said the remaining 94% needed immediate intervention.

The M2 bridge rehabilitation will be finished by the end of October.
News
3 years ago

Commenting on the progress made so far, JRA's acting managing director, Siyabonga Nodu, said that at least a quarter of the entire project had been done.

But the JRA's head of infrastructure development said the damage was worse than expected.

"We realised that there are more damages than anticipated. For now we have enough contingencies to cover those. But it’s a construction project, so between now and October things will change, so we anticipate that there will be some cost variation at this point in time. We don't know how much it is," said Siya Genu.

He explained the situation during a walk-about on the west-bound and east-bound sections of the bridge.

"During the assessment we didn’t have an opportunity to open the bridge into this level for us to be able to see, for example, the damage on the joints. It's something within the cost estimates; we had anticipated it would come up even though we didn't know the extent," he said.

Following the bridge closure, levels of crime reportedly increased. The criminal activities range from smash and grabs to vehicle thefts, and from assault to attempted murder, according to Johannesburg Metro Police Department (JMPD) spokesperson Wayne Minnaar.

He said at least 21 suspects had been arrested by the JMPD's reaction unit, which was launched on May 14. He described the unit as reactionary and highly sophisticated. It operates 24 hours a day.

The JRA raised concerns about the number of homeless people residing under various bridges, but said it had no jurisdiction to remove them.

Minnaar said the JMPD had received complaints and a substantial number of people were removed - but they appeared to be moving back.

"They will be removed in no time. We have quite a number of contingencies in place to deal with them, including our reaction unit," he said.

When TimesLIVE visited the bridge at about midday on Thursday, it was business as usual for the homeless people who live there, even as some packed up their bags after seeing a convoy of JMPD vehicles.

An attempt to speak to one of the homeless women - dressed in stockings, a bra and shorts - resulted in the woman threatening a reporter with a knife.

While it was unclear how much more money was needed to complete the M2 bridge rehabilitation project, the JRA said there were at least five more structures in the vicinity of the M2 that needed urgent intervention. The estimated costs for this were about R60m.

"There are other five bridge structures between or along the M2 which currently we are not working on; those we have identified that there is work that needs to be done urgently," he said.

Eloff and Wemmer Pan were some of the places identified as needing to be attended to urgently, as they needed to be opened to enable waterproofing to be done.

It remains unclear when these projects would commence.

Three months later, but is the M2 highway project at a standstill?

There appeared to be no construction workers on site this week at the bridge between the Crown Interchange and Maritzburg Street on the M2 highway in ...
News
3 years ago

While part of the M2 motorway in Johannesburg will be closed to repair its unstable bridges, scores of homeless people living there in squalid ...
News
3 years ago

It was too early to tell whether the road closure of a section of the M2 highway will drastically affect traffic moving from Germiston to ...
News
3 years ago