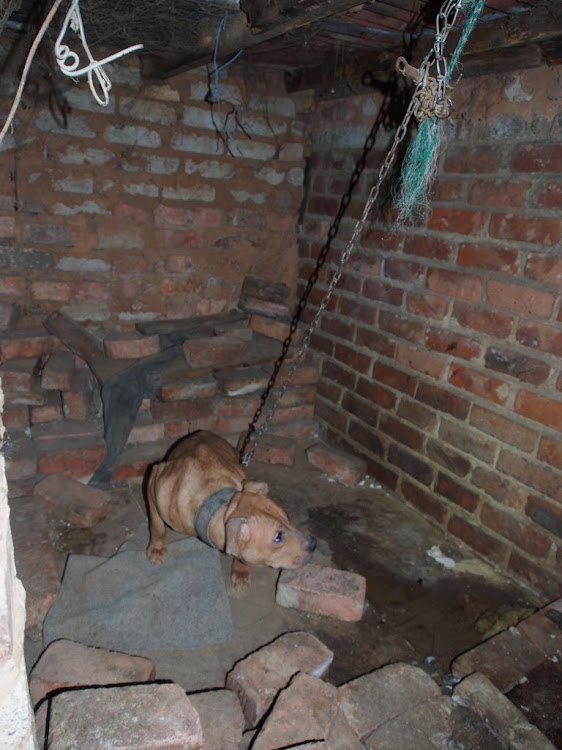 Dogs used for fighting were rescued from atrocious conditions in Atteridgeville by the NSPCA.
Image: NSPCA

The National Council of SPCAs (NCSPCA) has expressed jubilation at the sentencing of six people to jail for two-and-a-half years each for their involvement in the underground world of dog fighting.

A seventh person was sentenced to one year in jail for watching a dog fight.

The NSPCA, assisted by the police, raided an organised dog fight in progress in Atteridgeville, west of Pretoria, in June 2018.

The dog fighters had gathered in an isolated area where they thought they were safe from detection. Two dogs were writhing on the grass in a bloody battle while the dog fighters and spectators laughed and shouted. At this moment NSPCA inspectors and the police stormed in.

Six people pleaded guilty to owning and keeping fighting dogs, as well as subjecting these dogs to filthy living conditions and denying them medical care.

The court said Ribane had ample time to distance himself from the criminal activities but chose not to.

Mabena was also sentenced to a further six months for the torture of a dog called Mia.

"Mia was kept in a cold, dark room, chained so tightly to the roof rafters above that she couldn't lie down. She was sick from disease and infected wounds and was unable to even reach water," said NSPCA senior inspector Wendy Willson.

The NSPCA said the sentencing, regardless of the fact that the accused had pleaded guilty, reflected a shared sentiment among the South African courts that the crime of dog fighting would not be tolerated.

The NSPCA said in 2019 alone, 12 criminals had been sentenced to prison terms ranging from 12 months to five years for participation in dog fighting.

The NSPCA said its special investigations unit had secured the convictions of 50 dog fighters to date.

A partially blind, hearing-impaired pitbull was among 22 dogs found chained and caged in a filthy enclosure in Modimolle, Limpopo, the National ...
News
3 years ago

Meet the adrenaline-junkie poacher hunter and her loyal side-kick, Blu

"I'm not actually sure how it happened … It's just one of those things that unfolded in front of me."
News
3 years ago

Six people have been told they must stay in jail after appearing in court following their arrest in connection with a dog fight at the weekend.
News
4 years ago