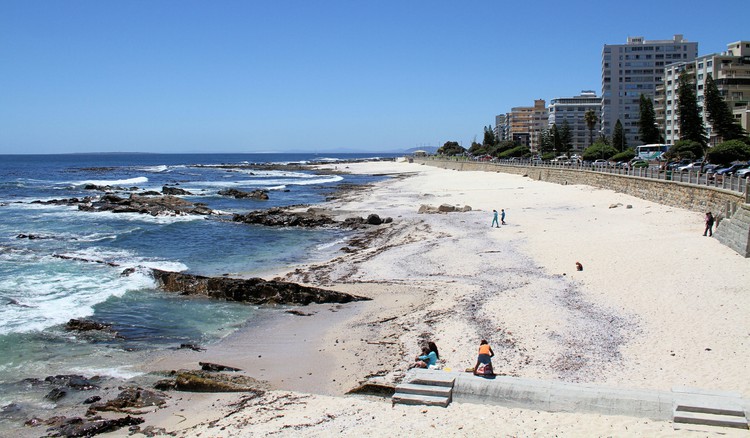 Esethu Mcinjana was arrested on the Sea Point beachfront on May 19 while taking selfies. At the time, she was waiting to go for her job interview.
Image: GroundUp/Wikimedia user Hilton1949

Good news for 23-year-old Esethu Mcinjana: she got the job that she hoped for.

On Thursday GroundUp reported that Mcinjana was searched and then arrested on the Sea Point beachfront on May 19, while waiting for an interview at a hotel in the neighbourhood.

She was held overnight at the Sea Point Police Station, accused of being in possession of “vehicle breaking implements” after the police officer who searched her bag found house keys with a broken gate remote control.

Mcinjana was released the following afternoon, after her mother made a statement describing where the remote control was from. But because of the arrest Mcinjana missed her job interview.

Cape Town mayor Dan Plato has urged a woman who was allegedly wrongfully arrested while sitting on a bench in Sea Point to lodge a complaint with the ...
News
2 years ago

After the GroundUp report she was called by the hotel and given a chance to attend an interview on Monday. Her application was successful and she has been accepted for a paid learnership.

“I was not comfortable going back to the same area for the interview because I didn’t know what would happen especially since my face was all over the news. But I went because I wanted the job so badly,” Mcinjana said.

She has been looking for a job since January. She lives with her mother who works as a security guard at a university, and her three-year-old sister.

“I am more than happy that I got the job and thankful for the second opportunity that was granted to me,” Mcinjana said. “My mother is a single parent and looking after my sister and I with her salary. Now I can help her with this job and look after myself instead of always asking her for things.”

Mcinjana said that at the end of the learnership she will be given a certificate which she can use to apply for more jobs in the hospitality sector.

The police station still has her house keys. She said that she has not been informed when they will be returned.

A SAPS statement on Friday said that an investigation, led by a senior police officer, had been started. Groundup sent further questions to the police, but we have not received a response.

Mcinjana has briefed lawyers who are assisting her with taking legal action.

A 40-year-old man will appear in the Krugersdorp Magistrate’s Court on Monday on charges of extortion and impersonating a police official.
News
2 years ago

Two men are expected to appear in the Roodepoort Magistrate's Court on Friday after they were arrested for allegedly soliciting a bribe of R5,000 ...
News
2 years ago

A 23-year-old Blue Downs woman is considering suing the police after being arrested while sitting on a bench in Sea Point and then being locked in a ...
News
2 years ago