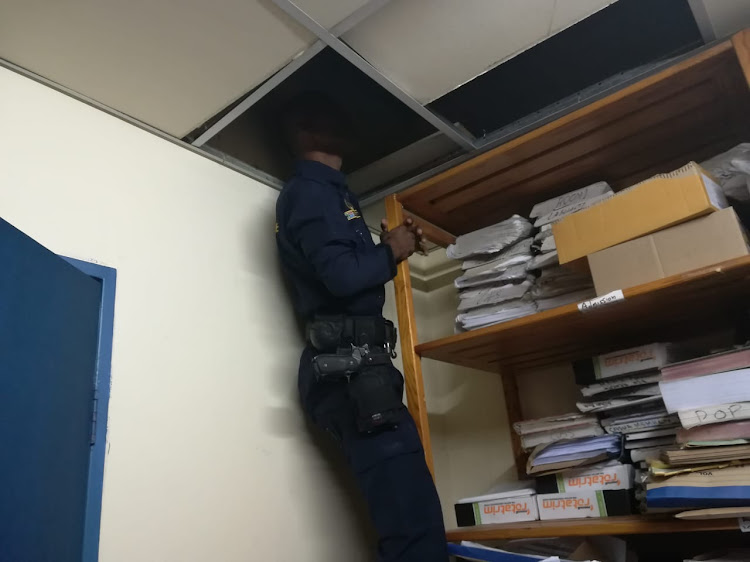 Police officers discovered Sandile Sibiya's body in the ceiling of a storeroom at Mahatma Gandhi Memorial Hospital in Durban on Friday May 24.
Image: Supplied

The recent discovery of a Durban builder's decomposing body in the ceiling of a hospital - two weeks after he was admitted with a broken leg - is being investigated by the KwaZulu-Natal health department.

Dismissing earlier reports that Sibiya was a mental health patient, Simelane-Zulu said he had been admitted to Mahatma Gandhi Memorial Hospital (MGMH) in Phoenix, Durban, on May 10 with a broken right femur.

She said after Sibiya's assessment, a discussion was held with the orthopaedic doctor at Addington Hospital for him to be transferred there. However, he disappeared soon afterwards and was subsequently reported missing by nurses.

The decomposed body of a man was discovered in the ceiling of a hospital in Durban on Friday.
News
2 years ago

"Following an unsuccessful search through various parts of the hospital by security, a case of a missing person was registered with SAPS," she said.

Over time, an unbearable stench began spreading through the hospital, emanating from a storeroom where fluid dripping from the ceiling provided tell-tale signs that something was amiss. Further investigation led to the body.

"A postmortem has been conducted by Forensic Pathology Services (FPS) personnel and will be made available to the next-of-kin," she said.

"The department is meanwhile conducting its own investigation, which is expected to yield a preliminary report by Friday. We will not hesitate to take the strongest possible action should anyone be found guilty of any form of wrongdoing."

The MEC said overcrowding and a lack of beds placed undue pressure on nursing staff, adding that the issue of overcrowding at public hospitals was being addressed.

"As a department, we encourage people to always go to their primary healthcare facility, which is their clinic, as the first port of call. People tend to flock to our hospitals because they believe they will get a better service compared to at a clinic, which is not always true, and then cause congestion," she said.

"We encourage our fellow compatriots to follow the referral system by starting at their clinics because that is where ailments such as common colds and other easily treatable diseases can be dealt with."

A Phoenix, Durban, man, badly mauled by dogs as he walked through the neighbourhood of Northcroft nearly two weeks ago, died as a result of his ...
News
2 years ago

Police are investigating a case of culpable homicide after three pedestrians died and a fourth was injured when an ambulance ploughed into them on ...
News
2 years ago

Woman gunned down and killed outside KZN clinic

A KwaZulu-Natal woman was found shot and bleeding in her car outside a clinic in Verulam, north of Durban, on Wednesday.
News
2 years ago