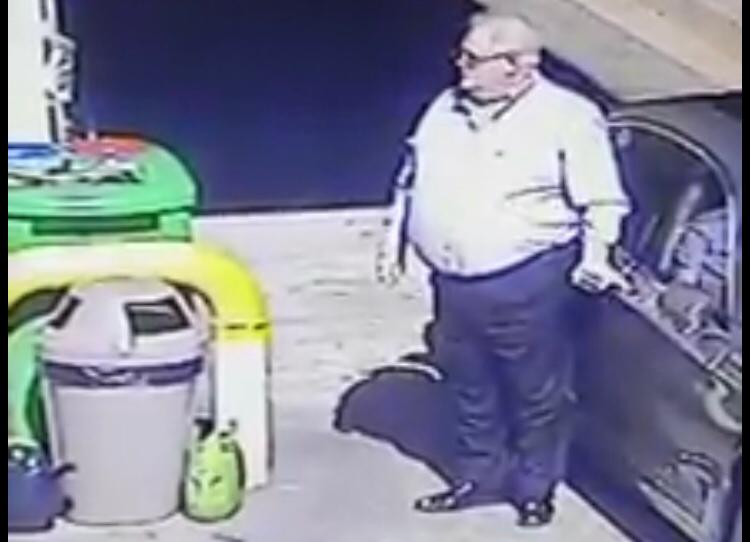 Former Bosasa chief operations officer Angelo Agrizzi looks out from his BMW after being held up at gunpoint in Johannesburg on Thursday.
Image: Screengrab

Former Bosasa chief operations officer Angelo Agrizzi was held up at gunpoint at a Johannesburg petrol station on Thursday.

Video footage of the incident, which was shared on social media, shows two armed men approaching the window of Agrizzi's BMW shortly after he opened his petrol cap to fill up the car. The petrol attendant runs for safety as the men approach.

TimesLIVE has confirmed that the driver of the car was Agrizzi, and that the incident took place on William Nicol Drive in Johannesburg at about 1pm. It was also confirmed that a bag containing notes and personal effects was taken.

The video shows the two robbers making off with a bag and getting into another vehicle. Agrizzi starts driving off but then stops and reverses to the petrol pump. The visibly stunned former Bosasa executive gets out of the vehicle, shaking his head.

The video is about two minutes long.

Agrizzi confirmed the incident to TimesLIVE but would not comment further.

However, the Citizen quoted him on Thursday night as saying: “The words uttered were ‘stop talking’. Well, many other threats have been making the rounds. The truth is I actually drove off because I wanted to chase after them. Then I decided not to. Besides, there wouldn’t be any point. The messages have been getting across.

“Do you think for a minute that certain people aren’t going to try absolutely everything to stop me, arrest me, and so on?”

It has emerged from the hearings of the Zondo inquiry into state capture that, according to Agrizzi's calculations, Bosasa received about R2.5bn in revenue annually via various contracts stemming from provincial governments, state departments and the private sector between 2000 and 2016.

Agrizzi testified earlier this year that the service provision company had forked out about R75m a year on bribes or "gratuities" to secure those contracts, and recollected that there were about 38 government officials and politicians on Bosasa's payroll.

Former Bosasa COO Angelo Agrizzi is expected to offer more explosive testimony when he returns to the stand at the state capture inquiry on Friday.
Politics
3 years ago