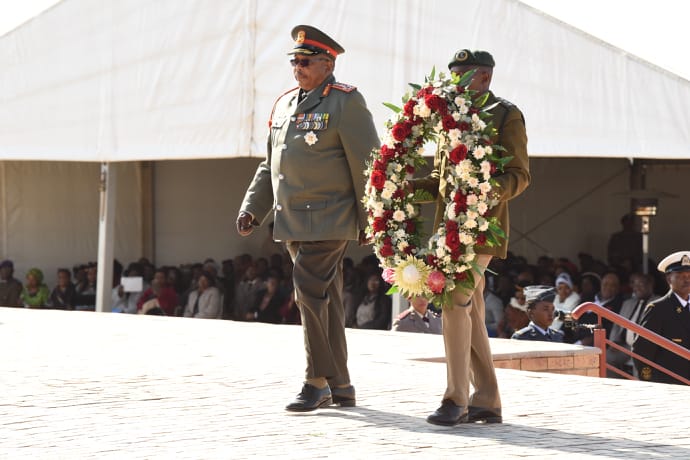 Six years ago Samuel Thulo was killed while part of a SA military operation in the Central African Republic - and his wife says it still feels unreal and she half expects her husband to return home safely.

Madikeledi Thulo was speaking on Wednesday as the defence force honoured fallen heroes at the UN International Peacekeepers' Commemoration Day in Bloemfontein.

Thulo described her husband's work as his first love. "He had so many options for a career but being a soldier was his dream. He made so many sacrifices to eventually join the army," she said. He had previously worked as a petrol attendant before being approved to join the army in 2008.

"He had a clear vision of what he wanted to become," she said. "He was a loving and caring person, who always ensured everybody was happy," she said of her late husband, who was killed in 2013.

Samuel was one of the 13 SANDF soldiers who died while helping to avert a coup in Bangui, Central African Republic.

While it had been six years since her husband died, Thulo said it was impossible to forget the day she learnt of his death.

"I thought he would come back, like he normally did ... but he never did. I could not hold  myself together, it was just unbearable," she recalled.

While it was not rare for a soldier to die in a foreign country, Thulo said she had hoped that God would not take her husband as they had a two-year-old child.

Speaking about the significance of the day, chief of the SANDF Gen Solly Shoke said: "The men and women we honour here today marched from the comfort of their homes and warmth of their loved ones, to make their contribution towards the dream that our former president Nelson Mandela had – a dream to silence the guns on our continent, protect vulnerable women, children, the elderly and the displaced."

Meanwhile Selekana Seakamela, the daughter of soldier Mokgadi Seakamela, who also died in Bangui, said she was consoled by the fact that her father died doing what he was most passionate about.

"He was a peacekeeper not only by profession, but even at home. He avoided even the smallest arguments. He always wanted to be a soldier and make sure there was peace all around the world," said Selekana.

The South African National Defence Union (Sandu) on Tuesday offered a different version to military top brass as to why 35 soldiers studying medicine ...
News
3 years ago

She said her family had lost a breadwinner but were grateful that, six years later, her father was still honoured and acknowledged.

"It's painful that our father died, but it's nice to know how much impact he had. He is still celebrated, it shows we are not the only ones who lost," she added.

Shoke said the fallen heroes were honoured annually for their contribution which generations continued to enjoy.

"Today, as a direct result of their collective efforts, joined by other African soldiers in peace support operations, total and relative peace is enjoyed in countries that they operated in and children are able to laugh out loud and happily play in the playgrounds – enjoying the fruits of these patriots' labour.

"They ran a good race for peace and we shall forever be indebted to their sacrifices," he added.

Parachutist who crashed into pole at Ramaphosa's inauguration not critically injured

The SA National Defence Force (SANDF) on Sunday warned against "inaccurate news" on social media after a parachutist crashed into a pole during the ...
News
3 years ago

SANDF rubbishes speculation of a coup plan in Botswana

The South African National Defence Force rejected “with contempt” allegations that it had information on a coup being plotted against the Botswana ...
News
3 years ago

SA has the 32nd strongest military in the world.
News
3 years ago