WATCH | 'I've recorded gruesome things. But I survived' - it's a wrap for police cameraman after 42 years

Veteran police cameraman Captain André van Lill retires after 42 years on the force and 34 years behind the camera.

Everyone gets to see the people in front of the camera. But a man who spent decades behind it is now in the spotlight.

Captain André van Lill, a cameraman with the Western Cape SAPS, retired on Friday after 42 years with the force.

"It's just been an absolutely amazing journey," Van Lill said about his time behind the lens.

"I have been one of the fortunate few, that I experienced apartheid, I experienced transition and I’ve experienced democracy. I believed whatever transpired in my vicinity, I am there for a purpose and I will film it."

During his career he earned 20-year, 30-year and 40-year medals for his service. Recently, he was awarded a certificate of recognition for his service and another for his contribution to broadcast media. 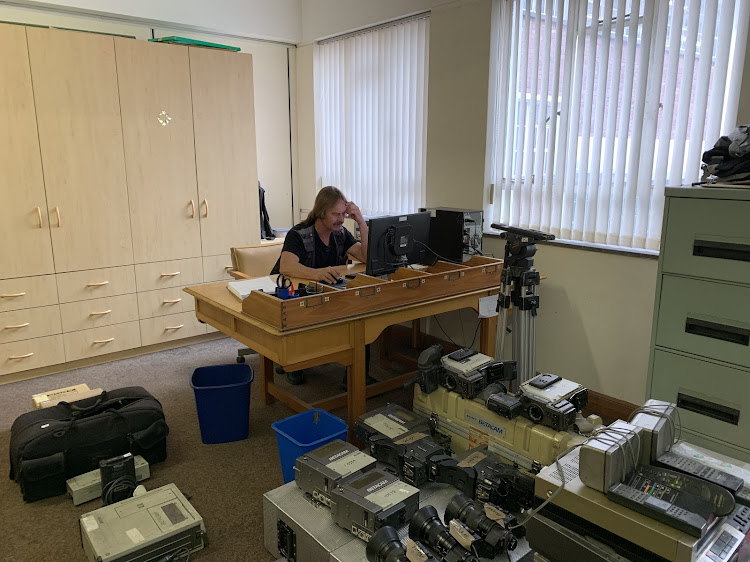 Van Lill's office, nearly packed up, is littered with cameras and equipment from all the decades he has worked.
Image: Stender Von Oehsen

The 60-year-old began shooting video eight years into his police career, after he was chosen for a training session by the SABC.

"They took this camera… and they put it on the table and I fell in love with the camera," he said. "I said this is what I want to do for the rest of my life. That changed my whole life."

Van Lill initially captured footage of riots, especially in the mid-1980s at the height of conflict.

Sure enough, he was able to see the country transition first-hand.

"I said, one day this is going to change and change for the better. And I was very fortunate, as a cameraman again on the day of change, when the honorable Nelson Mandela was released. I was there, I was filming."

An innumerable amount of his footage has appeared in police programmes like Police File and When Duty Calls, as well as on national and international news.

Some of the video he captured included drug and gun busts, chases and arrests - "things you only see in the movies," he said.

He is one of a kind. His weekly inserts for the national television programme When Duty Calls always stood out

Van Lill’s real passions were showcasing the work of the police to the public.

"Working outside in the field is a great way of acknowledging the good work that the members are doing," he said. "There’s a hell of a lot of good men and women outside there."

"You are informing the public at large, the community of South Africa: this is what the police do, this is the effort they go to, the extremes they go to ensure that criminals are apprehended."

The rest of the force is preparing for Van Lill’s absence, which, according to Captain Piet Smit will be felt immensely.

"We spent quality time together where he supported and mentored me. His discipline all these years was phenomenal. As we ventured into the different communities of the Western Cape for operational purposes he always displayed respect for fellow police officials as well as members of the public."

Provincial head of communications Brigadier Novela Potelwa also had high praise for Van Lill: "He is one of a kind. His weekly inserts for the national television programme When Duty Calls always stood out."

Van Lill plans to travel and explore "every corner" of the country with his wife, and said he looks forward to having time to garden and take care of his plants.

After more than four decades, he leaves with just one regret.

CCTV footage showing a brazen cash-in-transit heist carried out at Laudium Square in Pretoria on Tuesday has surfaced on social media.
News
3 years ago

Cash, pistol and cars seized as police close in on cash-in-transit robbers

One suspect was arrested and incriminating evidence was recovered in a house in Atteridgeville hours after an attack on a cash-in-transit vehicle ...
News
3 years ago

National police commissioner Gen Khehla John Sitole has welcomed the conviction and sentencing of four men for "follow-home robberies" from the OR ...
News
3 years ago