Can't afford insurance? Chain your car to a street pole like this Durban motorist did 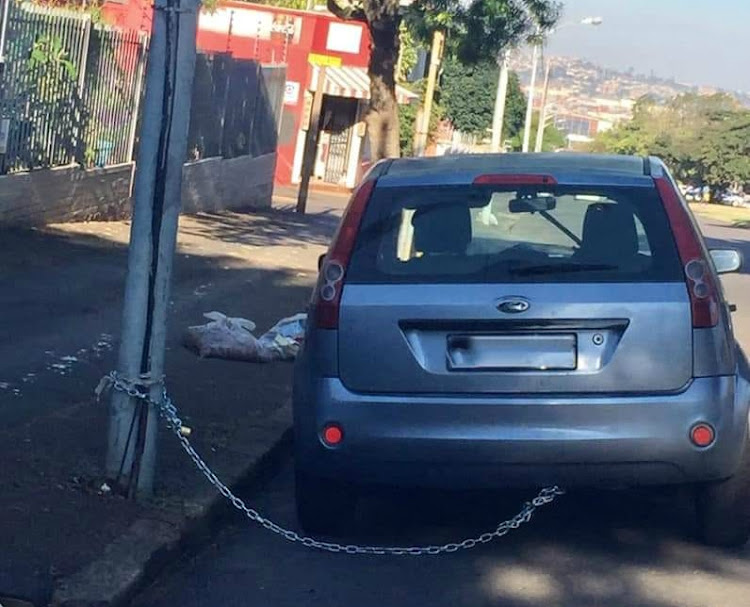 A Ford Figo was chained to a street light outside a block of flats in Glenwood, Durban.
Image: Supplied: Facebook/Christopher Pappas

A Ford Figo was chained to a street light by a overly vigilant Durban motorist taking car security to a whole new level.

Durban estate agent Trudy Beetge was driving down Alan Paton Road in Glenwood on Tuesday when she saw a car chained to the street light pole outside a block of flats.

"I just thought it was hilarious. When I saw it, I was like 'no man, this can't be real' so I did a u-turn to see if it was really was chained to the pole," Beetge told TimesLIVE.

When she saw that her eyes were not deceiving her she took a snap and shared it with friends and family to brighten their day. The picture made its way on to Facebook where people were left in stitches.

"Crime is bad baba! We must do what we can - my chain is in my boot," wrote Mmabatho Tembe

Some Facebook users said that this one was oldest trick in the book.

Beetge said that she did not know who the owner of the car was, but suspected that it could belong to a pupil from a nearby high school.

"I don't know who the owner is, but something tells me it might be a schoolboy from the school across the street, who just got his first car but can't afford insurance," laughed Beetge.

A mother of two toddlers was driving to work when her Ford Fiesta "randomly stopped working" and caught fire in the middle of a busy Honeydew main ...
News
3 years ago

First he raced it, then he jammed in it.
Motoring
3 years ago

An ambitious taxi took on Formula 1 driver David Coulthard ahead of the Red Bull Grand Parade in Cape Town.
Motoring
3 years ago