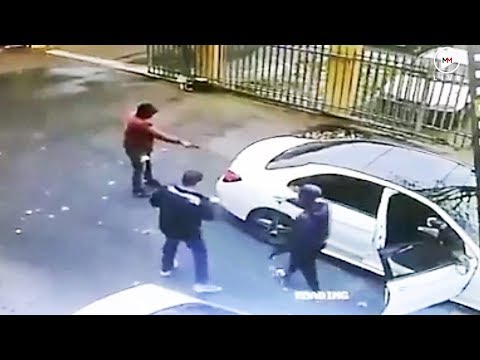 It took less than a minute for two armed men to rob a man in a seemingly secure parking lot on Tuesday.

CCTV footage of the robbery, in Airport Industria, near Cape Town International Airport, was released on Twitter by BOSBEER Cape Town.

The footage shows a Mercedes driving into the parking lot of a factory as a white bakkie drives by. The bakkie stops and two armed men run on to the property while the man parks his car.

As employees in the parking lot flee, the criminals get the man out of his car and force him to open the boot. They snatch an item from the vehicle and run back to their bakkie.

According to BOSBEER Cape Town, the item taken from the car was a briefcase containing documents. No money was taken.

Update. The briefcase that was taken in this robbery only contained documents.. NO money was taken... https://t.co/4dJYL0DWxE