President had promised to safeguard their human rights 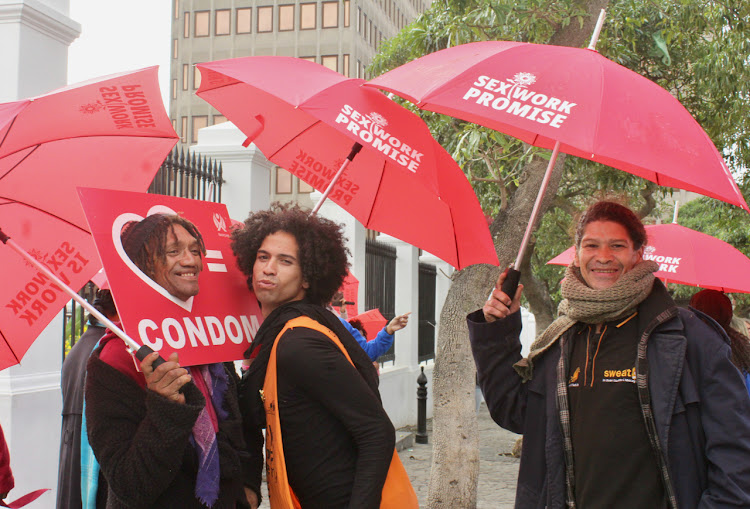 The Asijiki Coalition for the Decriminalisation of Sex Work, its members and allies gathered outside Parliament on Wednesday to thank President Cyril Ramaphosa for committing to decriminalising sex work and safeguarding their human rights.

A declaration to this effect was signed at the National Gender-Based Violence and Femicide Summit held in November 2018, jointly hosted by government and civil society organisations seeking to find solutions to gender-based violence in the country.

A sunflower and red umbrella with ‘Sex work is work” and “sex work promise” written on it was delivered to the president. National Coordinator and founding member of the Asijiki Coalition, Kholi Buthelezi, said that the sunflower from the sex workers was a gesture to the president.

“We want to thank him for being brave and want to remind him that he can consult us as sex workers when drafting the laws because we are in the industry and know better than anyone else,” said Buthelezi.

“The criminalisation of sex work puts sex workers in danger because they cannot access legal and health services that are enjoyed by everyone else. The bill will change sex workers’ lives because it will also help get rid of the stigma against sex workers. Sex work services are needed in the country. This is proven by the number of people who approach sex workers,” said Buthelezi.

“When I take the whole box of condoms [at the clinic] the nurses will look at me in a weird way and ask why I am taking so much,” said Felicia Abrahams. “After telling them that I am a sex worker, their reaction is not good. The president is our only hope now so that we are welcomed in society. Sex work is work.”

Are condoms the only way sex workers can protect themselves from STDs?

Charlene May of the Women’s Legal Centre said that one of the biggest challenges faced by sex workers is that they cannot report crimes committed against them.

“Police will first ask why were they standing in the street at night … There is this bad perception that sex workers are not entitled to services like everyone else and this is caused by the criminalisation of sex work,” said May.

Another sex worker, who gave the name Dirty Diva said, “A client can rape you and when you go to report it, the police will tell you that you gave consent. I know in New Zealand a sex worker can lay charges if someone refused to use a condom. That is what we want in South Africa.”

The president was not present to accept the flower, but it was accepted by Charles Ford, who said he works in the presidency. “The president is not here currently but this is a great gesture and I will make sure that it is delivered to him,” he said.