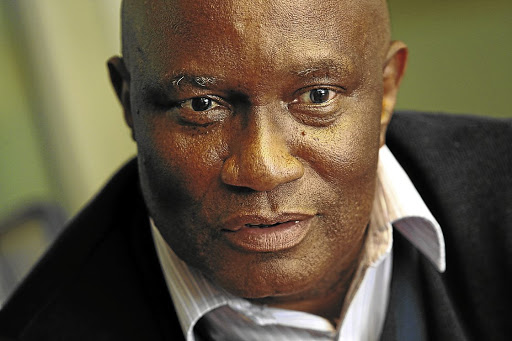 Former Financial Services Board executive officer Dube Tshidi has filed papers requesting a review of the public protector's report on his appointment of a particular attorney as curator for a pension fund that had fallen victim to 'surplus stripping'.
Image: Gallo Images

An investigation by the public protector's office into the Financial Services Board (FSB), following the stripping of pension fund surpluses in a fraudulent scheme that led to them being placed under curatorship, is being taken on review, with claims of bias against advocate Busisiwe Mkhwebane.

The pension fund mismanagement occurred a decade ago while the complaint was laid with Mkhwebane in 2017 by EFF leader Julius Malema. Among matters probed was that an attorney appointed as curator used his own law firm to recover assets on behalf of the fund under curatorship.

In her report in March this year, the public protector made findings of impropriety and maladministration against the FSB, now called the Financial Sector Conduct Authority (FSCA), and its then executive officer, advocate Dube Tshidi.

The regulating authority has now filed papers in the North Gauteng High Court requesting the court to review and set aside the report by the public protector. The matter is scheduled to be on the court roll in November.

"The review is sought on the basis that it is immediately apparent from the report that the public protector's findings and conclusions are entirely unreasonable. It is also our view that the manner in which she conducted her investigation renders the findings reviewable for perceived bias, bad faith and/or ulterior motives. The only other explanation for these failures is gross incompetence and negligence," the authority purports in a statement accompanying its legal challenge.

What a tweet: Why on Earth did Mkhwebane take her Gordhan spat online?

Public protector Busisiwe Mkhwebane turned to Twitter to announce that public enterprises minister Pravin Gordhan was implicated in her Sars ...
Politics
2 years ago

Tshidi has hit back in a lengthy affidavit, accusing the public protector of failing to respond to detailed submissions made to her office by the authority and of irregular duplication of matters already resolved in the courts.

He accused her of being "hostile" towards him and of failing to assess the credibility of the allegations being made against himself, the curator and the FSB.

Tshidi says there is clear self-interest from an implicated party behind the entire matter, and he is the "true source" of the unfounded allegations.

In the court challenge papers, he states that the EFF contacted the FSB directly before going to the protector's office with its claims. At a meeting, Malema was accompanied by a man who is facing criminal charges in connection with the pension fund stripping scheme to the meeting.

The curator was attempting to recover assets worth millions of rand from this man on behalf of a pension fund linked to the surplus-stripping, said Tshidi.

Since 2010, the man has been subject to criminal prosecution for his involvement in the  scheme. These proceedings are ongoing and Tshidi has testified as a state witness against him.

Public protector Busisiwe Mkhwebane confirmed on Thursday that her investigation into whether President Cyril Ramaphosa lied to parliament about the ...
Politics
2 years ago

The charges include fraud, theft and breach of fiduciary duties relating to his involvement in the surplus-stripping scheme implemented in two pension funds, one of which was later placed into liquidation.

The man has been criticised in the courts for making "substantially untrue" statements against the curator, the FSB and Tshidi.

"That (he) is motivated by a desire to obstruct his prosecution and the civil claims against him, and in doing so, resorts to false allegations against the FSB, myself and (the curator) in this endeavour, is by now a matter of public record," said Tshidi.

"...Unfortunately, it appears that the public protector had no regard to the true source of the complaints against me and the FSB, or the judgments (mentioned in the court papers). As a result, she failed properly to assess the credibility and veracity of the allegations she purported to investigate."

The public protector’s investigation was to second-guess court orders governing curatorships, and to duplicate investigative processes that were long under way, Tshidi said.

Tshidi states the public protector's conduct towards him was biased when she questioned him, and that her findings are "unjustified and unreasoned".

Phumelela Gaming and Leisure is to challenge the Public Protector's report on her probe into the corporatisation of the horseracing industry in ...
News
2 years ago

"The public protector failed to address or discuss the credibility of the various sources of information she considered, their reliability or the probabilities when faced with mutually destructive versions.

Mkhwebane dismissed the source of the complaint as "immaterial" in her report. According to a Business Day column, her key findings included irregularities in the nomination of curators by Tshidi, a failure by Tshidi to discharge his regulatory duty "to properly manage the possible or perceived conflict of interest between (the attorney's) role as curator and the appointment of his own law firm to assist in the administration of pension funds placed under curatorship"; and when written questions were posed to the minister of finance, the answers that Tshidi provided had caused the minister to mislead parliament.

These are all denied in the legal challenge filed by Tshidi.

The public protector's remedial actions included that there should be a wider pool of prospective curators to draw from through a competitive and transparent bidding process, and that the regulatory authority should adopt a policy to regulate the nomination process of curators.

The Government Employees Pension Fund (GEPF) held 428-million shares in Steinhoff with a market value of R24bn at end-November‚ a week before the ...
Business Times
4 years ago