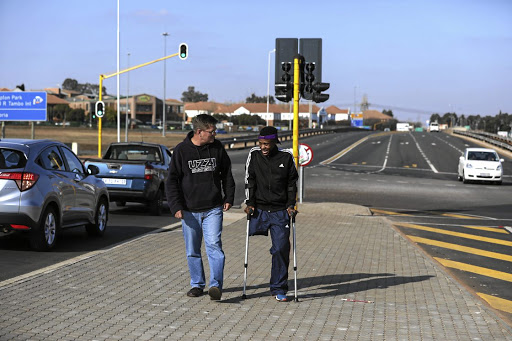 Xolani Luvuno and his patron, Hein Venter, at the intersection where they met. The former drug addict was allowed to enter the Comrades Marathon last year but was banned from this year's race which took place on Sunday.
Image: Simphiwe Nkwali

"Xolani will be fine without the Comrades, he doesn't need the race, it isn't everything in life." This is what Hein Venter, Xolani Luvuno's patron, had to say in response to whether  he would be running again in 2020.

Venter claimed that Luvuno, an amputee and former drug addict, was treated "like a criminal" and was sidelined by the Comrades Marathon Association (CMA) in his pursuit of this year's race, despite having inspired thousands of South Africans when he reached the finish line in 2018.

Luvuno touched the hearts of many South Africans and was hailed as a hero last year for his courage and determination to change his life for the better. He had been allowed to participate in the race without completing the qualifying race of 42.2km which must be finished in 4 hours and 50 minutes.

However, this year, the CMA said Luvuyo could not be allowed to participate as he had not gone through the qualifying race. Venter said all his efforts to get Xolani into the Comrades failed.

"They said they had made a mistake by allowing him to participate last year. They disregarded that he inspired many people. We still need to sit and plan but we can just forget about the Comrades. There's more to life and his dignity is far more important than the treatment he received."

They said they had made a mistake by allowing him to participate last year.

CMA officials told Sport24 that Luvuno had not qualified and that no exceptions are made.

"He didn't qualify, it's compulsory for everyone," CMA chairperson Cheryl Winn said.

Determined to defy the odds again, Luvuno decided to run "unofficially" using his 2018 number. He started his race seven hours prior to the official race, on Saturday night, unguarded. Venter claimed that during his race, he was instructed by police to run on the pavement.

Venter described this treatment as inhumane and accused the association of stripping Luvuno of his dignity by treating him like a criminal. "Nothing made sense because he was using the road as a member of the public, why was he asked to move to the pavement? The official race had not been started."

Luvuno did not make it to the finish line as he was avoiding controversy which would stem from questions around his eligibility to run the 2019 race. After a gruelling 82km, he called it a day, without a medal or any form of recognition.

Venter said although it would mean a lot to have Luvuno run in the coming years, they were not looking to challenge the association's policy on inclusivity.

"No, we will not do anything. If they don't want him then it's fine. We don't need the Comrades as, in the eyes of the people, he is a hero."

The recent Ironman 70.3 triathlon pushed amputee athlete Xolani Luvuno to his limits, but he says it was worth the challenge.
Sport
3 years ago

In this episode of The Big Small Business Show, Xolani Luvuno explains how he used his psyche of steel to get off drugs and alcohol and set his ...
Features
4 years ago

After Comrades on crutches, Xolani Luvuno is aiming for Iron Man