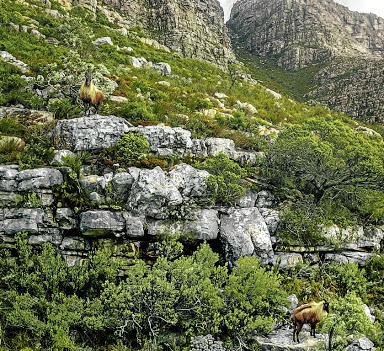 A new hiking app aims to make all 1,300km of the Cape Peninsula’s hiking trails a lot easier to navigate and to keep explorers safe.

Forge is designed by hikers, outlining the various routes in terms of difficulty, elevation, terrain type and accessibility. Co-creator Alex Weiss says the app, free for download on the app store, is going to change the way people explore the breathtaking region.

“Reading paper maps isn’t everyone's forte,” he said. “Also, what we found is that there wasn’t a single portal where people could get accurate info about the trails. This information is accurate and thorough.”

The app uses GIS (geographic information system) technology, and is the brainchild of the start-up group Forge New Frontiers from Cape Town.

“What’s unique about it is that all our trails are attributed with info we think will be useful to people - what kind of terrain there is, can you walk your dog, can you take your bike… we want it to be as simple as possible,” he said.

“The digital map shows you where you are so you can take the right path.”

The app will also be adding emergency contact features as well as demonstrating a hiker’s position at all times, in an effort to make the routes safer for locals and tourists alike.

“We want to keep people on the path. We’ll be trying to incorporate emergency contacts and will be making improvements as we go along.”

However Weiss hopes that the app will encourage people to explore the less popular, but no less breathtaking routes that the app has been configured for, and says that as avid hikers themselves, the team behind Forge believe that this will really improve your experience.

“We’ve been hiking all our lives,” he said. “We hope people will start to discover new routes and not just take the popular routes.”

Weiss says that they will be expanding the range of routes available on the app beyond the Cape Peninsula, and hope to incorporate many more of SA’s hiking routes in the coming months.

Botha Msila is hiking from Cape Town to Cairo to support Bafana Bafana in the 2019 Africa Cup of Nations (Afcon).
Sport
2 years ago

A 25-year-old hiker who slipped after slipping and fell about 50m off the top of Lion’s Head is being treated for serious injuries in hospital after ...
News
2 years ago

The 9km Kranshoek Coastal Walk near Plettenberg Bay goes through indigenous forests and along spectacular pebble beaches, and if you're really lucky ...
Lifestyle
2 years ago