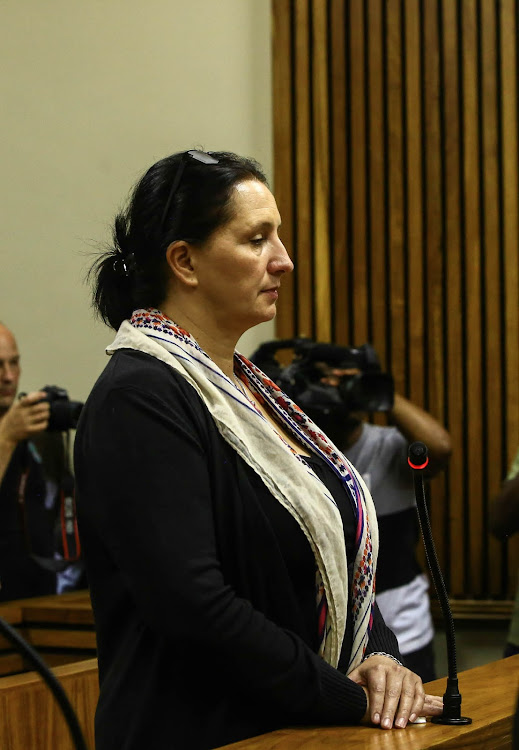 Convicted racist Vicki Momberg has fallen out with another set of lawyers following an outburst during her appeal proceedings at the High Court in Johannesburg on Tuesday.

Momberg was convicted on four counts of crimen injuria last year for using the k-word 48 times against police officers and 10111 operators trying to help her after a smash-and-grab incident in 2016.

The presiding magistrate at the Randburg Magistrate’s court, Pravina Rugoonandan, sentenced Momberg to an effective two-year prison sentence for the crimes, though after a short prison stay she was granted bail once she succeeded in being granted leave to appeal last year.

She has now launched the appeal at the High Court in Johannesburg to overturn her conviction and sentence.

Throughout her criminal trial, Momberg argued that she was in such a state of panic following the smash-and-grab that she had no control of her actions, a defence known to the court as sane automatism or non-pathological criminal incapacity.

Ultimately, magistrate Rugoonandan believed this was an insufficient defence and ruled that Momberg had full control of her faculties when she was dishing out the dozens of slurs at her victims.

Before proceedings could begin in earnest, Momberg began interrupting proceedings because she claimed she was unwilling to tolerate the media presence in the courtroom, particularly after judge Thifhelimbilu Mudua agreed to let video cameras into the room to cover the proceedings.

While her lawyers tried to explain that they would not be willing to launch an application to remove reporters from the courtroom, Momberg stood up in the dock and began addressing the judge herself.

Convicted racist Vicki Momberg will not be representing herself in an upcoming appeal against her conviction and sentence, after getting a new legal ...
News
3 years ago

"The media have endangered my life … there’s no respect from the media," she told the judge, stating that some media had published her contact details in the past.

Her defence advocate, Sukdeo, tried to apologise to the judge for the outburst, and said that Momberg had claimed she was traumatised by the media coverage of the case, and felt endangered.

This resulted in Momberg once again interrupting, asking the court if she could represent herself.

Sukdeo explained that this meant he had been asked to terminate his mandate as her lawyer, with the court adjourning to allow Momberg to think about this decision.

However, outside of proceedings, Rogers returned to the court, loudly saying: "Mandate is terminated, we’re out of here."

He confirmed that he and Sukdeo had been representing Momberg pro bono (free of charge).

His reputation was more important than money, the attorney said.

"The tail does not wag the f****ing dog," Rogers said to prosecutor Jacqui Drotsky.

Momberg has had a series of legal teams in the past, with many claiming they could no longer deal with her due to either vague or ridiculous instructions, choosing to part ways with her, sometimes in the middle of her trial.

On Tuesday, Momberg was once again hostile to reporters even before proceedings began, taking photos of journalists and claiming she would sue them. She also threatened to slap a Media24 photographer in the face for taking photographs prior to proceedings.

The Randburg magistrate's court has turned down an application by the lawyer representing convicted racist Vicki Momberg's to withdraw as her ...
News
3 years ago

Black skin is a licence to use K-word, says Sibusiso Peter-Paul Ngwenya

When is it OK to call a black person the K-word? Any time you like - as long as you're also black.
News
3 years ago

'She has insulted me in court': Vicki Momberg's lawyer wants to quit

Convicted racist Vicki Momberg might have to find another lawyer after a relationship breakdown has left her attorney feeling "insulted".
News
3 years ago