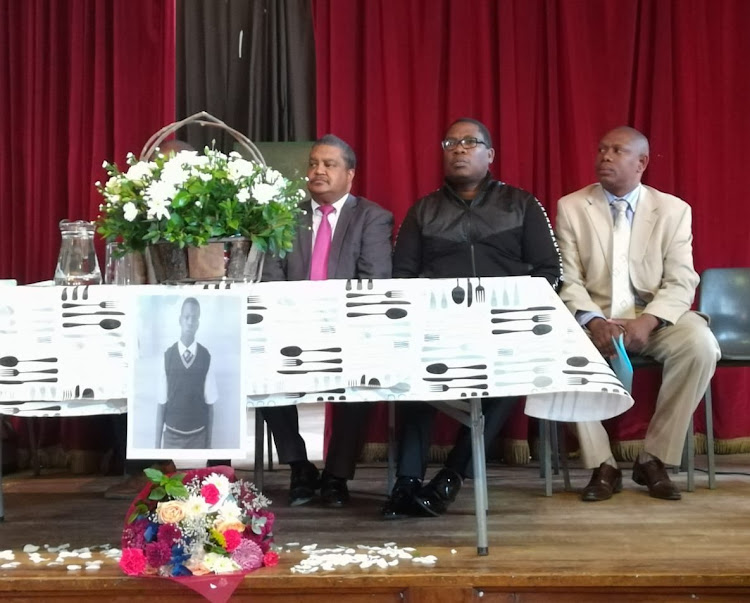 This comes as the Gauteng department of education has discovered that at least 13 pupils in the province are facing criminal charges, to the shock and embarrassment of its MEC.

The department said it made the discovery after the National Prosecuting Authority (NPA) announced that slain Forest High pupil, Daniel Bakwela, had pending cases they had to attend to.

"We instructed departmental officials to go to to all courts to establish the number of learners that are charged in court and the number of pupils that are about to appear in court.

"I'm ashamed, my dear children, that as I'm speaking to you now, we've got about 13 children across the province that are appearing in court for various crimes that they've committed outside the school premises. It's embarrassing," Lesufi revealed.

He was speaking at a memorial service for Bakwela, who was stabbed to death allegedly by another pupil, Mohammed Mwela, in an alleged gang rival fight.

Parents who criticised Forest High School in Turffontein, south of Johannesburg, in the wake of pupil Daniel Bakwela's killing were called to account ...
News
2 years ago

Bakwela was due in appear in court on a charge of armed robbery in August.

Lesufi urged pupils to focus on their school work and engage in a battle of ideas - not knives.

"There is no child that is born ill-disciplined in this world. Why are we such an ill-disciplined nation, a nation that believes that it can resolve problems through violence?," he questioned the pupils.

Lesufi told the Bakwela family, who attended the memorial at the school, that he had no words to comfort them as he had been equally devastated by the loss.

"I want to apologise to you upfront, you are going to be inconvenienced, it's going to very difficult for you. Daniel's death can't be in vain, we have to rectify the wrongs that are happening in this school and outside the school," said Lesufi.

The department announced that it would deploy undercover police around the perimeter of the school, and if needed, inside the school as well.

Pupils alleged to be involved in wrongdoing would be arrested on the spot.

Lesufi also called for the closure of shops open for business to pupils during school hours.

"Any shebeen around the school must be closed down and this does not apply only to  this school.

"We have identified almost eight schools that are in the same situation that we are going to enter and enforce the law. And the law is very clear, no tavern, no shebeen, next to a school or next to a church," he said.

Daniel Bakwela, the 18-year-old Forest High pupil who was stabbed to death last week, was facing an armed robbery charge.
News
2 years ago

The school's Representative Council of Learners (RCL) president, Nobuhle Mashinini, slammed the parents and the department for their lack of support but expressed gratitude at Lesufi's intervention nonetheless.

"Things have been happening at the school, we have been crying for help, there's been several meetings with little or no attendance, but we're confident that the MEC's commitments will bring about change," she said.

Mashinini raised concerns about safety inside the school premises and said sometimes teachers' hands were tied. Parents' intervention was needed, she argued.

Lesufi said there would be a meeting with various stakeholders to address issues of bullying at school.

One initiative, he said, was to identify 500 bullies across the schools in the province and experts would assist them to deal with their issues "before they can kill our children".

Lesufi said problematic over-aged pupils should be dealt with. This comes after the magistrate hearing Bakwela's case, Basimane Molwana, slammed the department for a lack of policy on school leaving: the accused in the case is a grade 11 pupil at 20 years old and the victim was only in grade 8 at the age of 18.

Surveillance footage at a Sea Point high school has helped police nab one of the culprits involved in an armed robbery at the school last week - a ...
News
2 years ago

"This thing, over-aged pupils, this thing of pupils thinking they can do as they wish, they must know their time is up, but we must also accept as the education sector that we need help," he said.

Lesufi said the department would comply fully with the court order for Bakwela's alleged killer, Mwela, to write his three remaining mid-year exams, and said that an alternative school had been arranged for him to complete his studies.

While Mwela faces a charge of murder and two of attempted murder in the legal system, he also faces the prospect of school disciplinary charges.

"We have served him and two other boys that were involved in this fight with charges and I've instructed the SGB [school governing body] of the school to immediately convene that disciplinary hearing so that those that are found guilty can leave our school in peace.

The department said it was looking at the possibility of a regulation that forces pupils that are appearing in court to declare this to the department, so that officials can take appropriate steps against them, with the failure to declare this being declared an offence.

The Western Cape education department says gangsterism and an “under-resourced” police force are at the heart a spate of violence in schools across ...
News
2 years ago

School teachers cannot be expected to fix the psycho-social problems in communities that have led to a spike in pupils being killed, harmed or ...
News
2 years ago

Education MECs in two provinces planned to visit schools on Friday where violent attacks have occurred recently.
News
2 years ago

Four pupils arrested after attacking police at school in Soweto

Gauteng education MEC Panyaza Lesufi has condemned the violent behaviour of pupils at Freedom Park Secondary School in Soweto who attacked police on ...
News
2 years ago