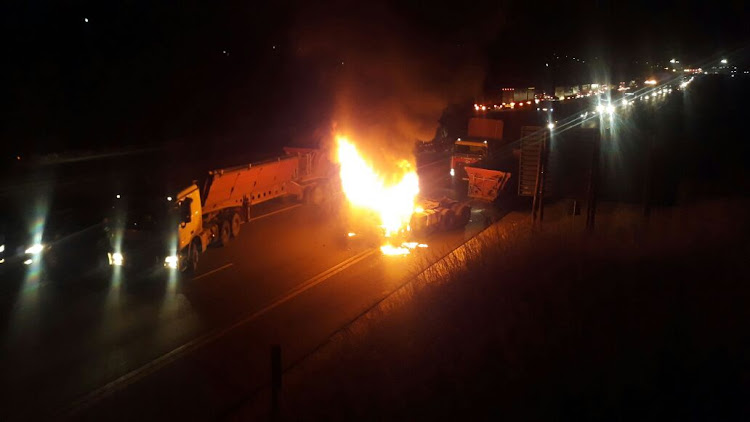 The N3 highway - the main road route between Johannesburg and Durban - was shut in both directions recently as protesters burnt trucks.
Image: SUPPLIED.

While millions of South Africans are set to celebrate the birthday of Nelson Mandela on July 18, a landmark case for the trucking industry will be heard in the Pietermaritzburg High Court.

The trial comes in the wake of a wave of attacks on trucks and drivers which have left several people dead and caused at least R1.2bn in damages to vehicles and cargo, according to the Road Freight Association (RFA).

The issue between the PFSF and the ATDF - neither of which are registered with the National Bargaining Council (NBC) - is largely related to the hiring of foreign truck drivers, while competent South African drivers remain unemployed despite having the necessary qualifications.

Police must do more to curb hijackings and murder of truck drivers, says investigator

Police need to step up their efforts to lower the high rate of attacks on trucks and truck hijackings.
News
2 years ago

PFSF recently obtained an urgent court interdict to prevent the looting of trucks, the harming of drivers and the burning of trucks.

The interdict was granted on May 30 against those believed to be responsible, specifically ATDF leaders Sipho Zungu, Cele Khumbulani, Mncebe Sihle and Nkosenye Buthelezi.

ATDF chairperson Zungu told TimesLIVE that they were innocent and that the case was critical in voicing the concerns of South African drivers. "How can we fight our own people? We cannot ask for jobs and then go and destroy the very same trucks that we would need if we are hired," he said.

Zungu said the foundation had proved to the government that many foreign drivers were employed in SA. "We have come forward and provided the facts. Those that allege we are involved in these attacks, where are their facts? If they have proof that ATDF members are involved, then why have those members not been arrested," he said.

Zungu said despite the case against the ATDF leadership, nothing would deter them. "People always look at what's going on and are quick to point fingers, but no one wants to look at the root cause of the problem and find a solution.

"I am a victim of unemployment. As we speak, I am sitting at home with my 15 years of truck-driving experience."

At least three trucks were torched at a depot in Balgowan in the KwaZulu-Natal  midlands, while another caught alight after its brakes failed at the ...
News
2 years ago

Advocate Pria Hassan of the PFSF said they had opened the doors of communications with ATDF but became victims of bullying and intimidation.

"We will not stand for this. How long will we as an industry be able to tolerate such violence and outright attacks on many of our own people?" she said.

Hassan said the modus operandi of the perpetrators in these attacks was clear.  "They entice violence through communities, promising jobs. What do we do now with all the foreign drivers in SA who have permits that allow them to work?"

Hassan said bigger logistics companies affected have been able to shrug off their losses, but smaller companies are not as privileged. "The smaller guys are not being heard and they are the ones that are really being affected by these attacks," she said.

The day of the trial is set to coincide with a national shutdown.

In a widely circulated WhatsApp message, truck owners were warned of a looming national strike and that no trucks should operate on the day, which had been billed "Trucking Black Day".

SA's trading partners might shun Durban and use other ports to export their products if truck attacks on the N3 highway continue unabated.
News
2 years ago

The South African Transport and Allied Workers Union (Satawu) in the meantime expressed its disappointment at the government's decision to engage with the PFSF.

In a media statement on Monday, Satawu said it was worried that the government had given an ear to the PFSF while excluding registered trade unions and employers who are party to the National Bargaining Council (NBC) for the road freight and logistics industry.

"The association is on record for saying South Africans do not possess the required skills to drive their trucks, thereby justifying the employment of undocumented foreign nationals," said the union.

Satawu deputy general secretary Anele Kiet said the element of criminality regarding the destruction of trucks would need to be urgently resolved. "A high level of crime intelligence needs to be deployed to deal with this," he said.

Kiet warned that if the government did not heed Satawu's calls for intervention, the union would be left with no choice but to approach the NBC and stop all operations regarding the movement of goods.

Satawu called on the ATDF to register with the NBC so it could voice concerns via a legitimate platform.

KZN premier Sihle Zikalala is expected to provide feedback early next week into the ongoing dispute.

With dozens of truck drivers killed or injured, and R1.2bn in damages to trucks and cargo, motorists have now been warned to avoid travelling on the ...
News
2 years ago

'We are Team Transport' - Fikile Mbalula in quotes

The minister met with heads of transport public entities on Tuesday in an effort to get the transport sector working for all South Africans.
Politics
2 years ago

Direct, deadly attacks on SA truck drivers are getting worse

Rocks being hurled directly at truck drivers is "something new" as a spate of attacks on the "soft targets" plays out on the country's roads - some ...
News
2 years ago