Set your braais, ready your frying pans, the sardines are coming 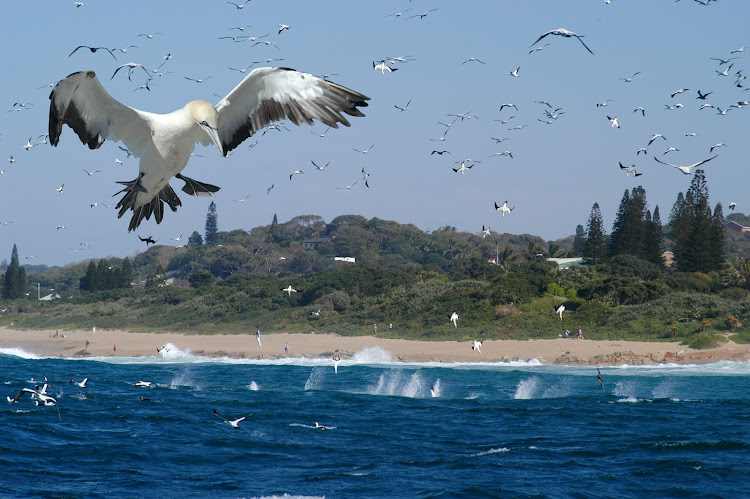 Gannets dive in during the sardine run.
Image: Supplied

Get your frying pans ready, the sardines are making a run for it.

According to the KwaZulu-Natal Sharks Board, sardine-related activity was reported on the Eastern Cape's Wild Coast, including in Port St Johns, on Wednesday.

The sardine run is a unique marine phenomenon - dubbed the greatest shoal on earth - that usually takes place in June or July when shoals of the small, silvery fish leave the cold waters off Cape Point and make their way to KwaZulu-Natal.

“It was reported that there were large shoals of fish spotted, with thousands of gannets feeding among these shoals. We also received a report late yesterday afternoon of activity in the Rame Heads area, which is 26km south of Port St Johns. This activity consisted of common dolphins and gannets feeding in this area,” said Sharks Board head of operations Greg Thompson.

Thompson said it was hoped the incoming cold front would increase activity and that sardine lovers should be on the lookout.

“Please keep in mind that most of the reporting and feedback we are receiving is in the inshore areas, so there is always a possibility of being surprised by fish which have moved through undetected in the deeper waters,” Thompson said.

“These fish are very unpredictable and have always kept us all guessing about their movements,” he added.

The fish are a popular delicacy, eaten fried, grilled or braaied with masala and lemon.

WATCH | Swallowed by a whale! But PE tour operator lives to tell the tale

A tour operator in Port Elizabeth narrowly escaped being swallowed by a whale.
News
3 years ago

Sardines a no-go for Durban

It seems the sardines maybe giving Durban beaches a miss.
News
3 years ago