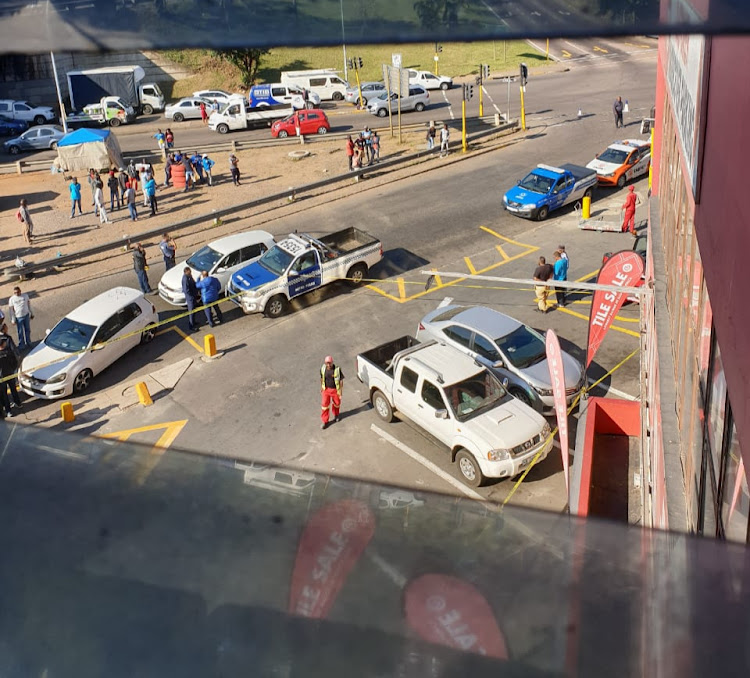 The scene of an armed robbery outside a prominent tile business in Durban on Friday.
Image: Supplied

Armed robbers escaped with two boxes containing an undisclosed amount of money after robbing a G4S security vehicle at the parking lot of a prominent tile business in Mayville, Durban, on Friday morning.

Police spokesperson Lt-Col Brenda Muridili said the armed suspects confronted the G4S security personnel and robbed them of two boxes of money outside Malls Tiles. "Shots were fired but there were no injuries," she said.

Dhevan Govindasamy of PT Alarms, which responded to the armed robbery, told TimesLIVE that the G4S security members had gone to the tile business to collect money when they were attacked by about four or five armed suspects who arrived in a red Datsun Go.

He said after the suspects had robbed the G4S security personnel, the guards fired at them, shattering the rear window. One of the suspects ran on to the N3 on foot and disappeared. The other suspects sped off in their getaway car.

Govindasamy said they drove around the vicinity in search of the suspects but their efforts were in vain.

Brazen gunmen who robbed a cash-in-transit vehicle then hijacked two vehicles – one of them a police van - in a bid to escape with the loot.
News
3 years ago

The second foiled cash-heist in as many days in KwaZulu-Natal saw elite police tactical units and heavily-armed robbers trading gunfire in the ...
News
3 years ago

Motorists were forced to flee when a gang of criminals robbed a vehicle in broad daylight in Johannesburg.
News
3 years ago