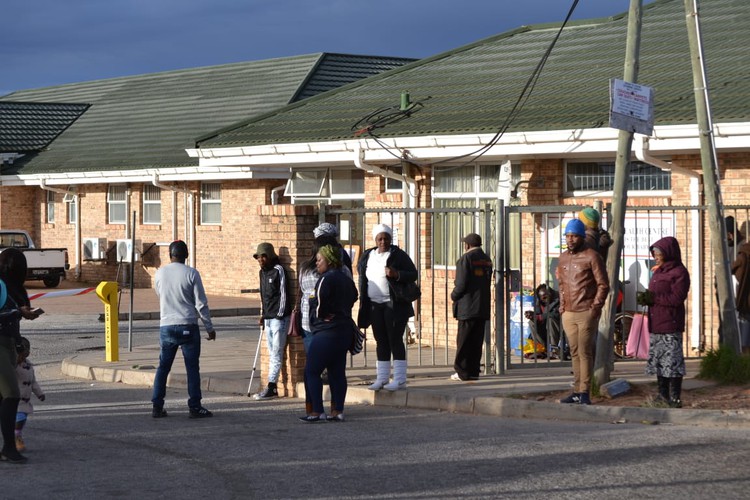 Patients mill about outside Motherwell Community Health Centre, where nurses have been staging a sit-in since Monday.
Image: GroundUp/Joseph Chirume

Nurses at Motherwell Community Health Centre in Port Elizabeth have staged a sit-in since Monday. They are demanding that security at the facility be improved.

The sit-in by about 100 people follows a patient attacking a nurse on Saturday. The nurse was treating the patient’s stab wound. After attacking the nurse, he also attacked two security guards who came to help when they heard her screaming. The patient was then arrested.

A nurse who asked not to be named said working night shift was a challenge. “We have a life-threatening situation at this facility because of patients who come here drunk, and most of them are aggressive. The department should allow security guards in when we are attending to people who are drunk,” she said.

But Department of Health provincial spokesperson Sizwe Kupelo said the attack did not happen because of relaxed security.

A 24-year-old Free State female doctor bit a man’s tongue so severely he required surgery, after he allegedly attempted to rape her at the hospital ...
News
2 years ago

He said because of the confidential nature of health worker-patient interactions, the department could not place security guards inside consulting rooms and operating theatres.

Kupelo did, however, say that the department had a duty to protect everyone on its premises and it would continue to ensure a safe environment for staff and patients.

“We would like to call on patients to stop attacking staff because there will be no one to help them if our nurses and doctors are too scared to treat them,” he said.

He said counselling services had been offered to the attacked security guards and nurse.

Kupelo also said the protest was about more than Saturday’s incident. He said the nurses were debriefed and “we realised now they are raising issues that are not related”. He appealed to nurses to return to work.

Motherwell clinic has about 100 workers, 47 of whom are professional nurses.

A patient in a wheelchair said she was visiting the facility for the second consecutive day and no one had yet told her what was taking place at the facility. “I take my medication from this clinic, but I am now defaulting and that will obviously worsen my situation. I feel pity for the nurses because of their situation. The community should always come together and protect nurses against violent people,” she said.

There were patients in the facility who did not want to talk to the media, but were visibly in pain. Some were in the company of family members who complained about having no money to go to Livingstone or Dora Nginza hospitals.

The Motherwell clinic is the only one in the township that is open 24 hours. It is also a place where referral letters are issued to hospitals for further treatment.

Kupelo said the action by the nurses may negatively affect patients who need healthcare but cannot afford to travel to other areas.

A 24-year old doctor was attacked while she was on call at Pelonomi hospital in Bloemfontein on June 4 2019.
News
2 years ago

The chairperson of a nursing union at Mamelodi Hospital in Pretoria says an investigation into an incident in which an elderly woman was tied to a ...
News
2 years ago

‘It’s chaos’: Doctors, nurses work in fear of their lives

It’s been nine years since Dr Senzosenkosi Mkhize was stabbed to death by a patient in Middelburg Hospital, but the SA Medical Association says ...
News
2 years ago