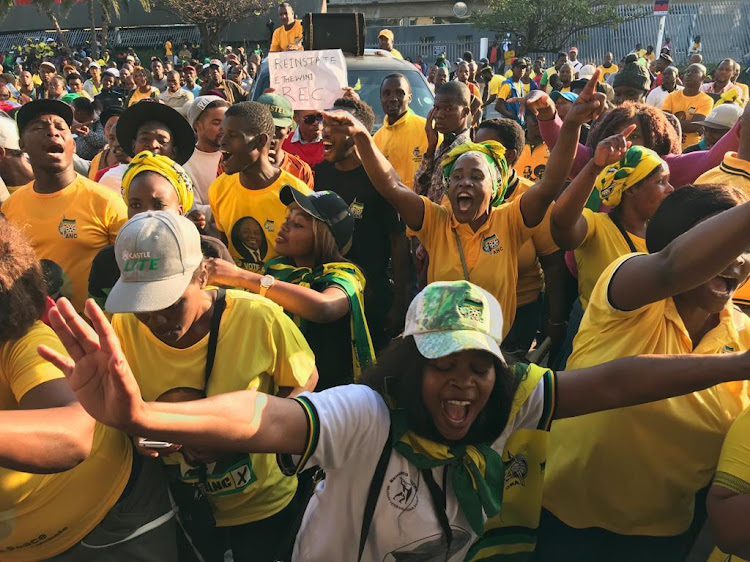 The situation remains tense outside the ANC KwaZulu-Natal provincial offices in Durban, where hundreds of supporters of embattled eThekwini mayor Zandile Gumede gathered on Stalwart Simelane Street on Tuesday.

Police formed a tight ring of security at the entrance to the ANC office as angry supporters pushed, threw rocks and shouted angrily at the policemen.

The protesters are calling for Gumede to be reinstated.

#ZandileGumede supporters clash with members of #SAPS outside the #ANC Provincial Offices in Durban's CBD. A few warning shots were fired by police after rocks were flung by. The situation remains tense. @TimesLIVE pic.twitter.com/3kmjWZGwPI

This comes after a decision by the ANC in KZN that she be placed on leave for 30 days amid a corruption case involving a Durban solid waste tender in which Gumede has been implicated.

Gumede is on R50,000 bail after being arrested for corruption relating to the R230m tender.

A delegation of supporters was allowed into the building to enter into talks with senior party officials regarding their grievance.

Earlier, ANC deputy chairperson in KZN, Mike Mabuyakhulu, attempted to address Gumede's supporters outside the entrance to the ANC office, but was chased away. The protesters insisted on talking to provincial chair Sihle Zikalala or secretary Mdumiseni Ntuli instead.

The ANC in KwaZulu-Natal has admitted that it took a long time to act against embattled eThekwini mayor Zandile Gumede over her arrest in connection ...
Politics
2 years ago

Controversial eThekwini mayor Zandile Gumede will be taking a leave of absence from Monday following a resolution by the ANC's provincial executive ...
Politics
2 years ago

Opposition parties in the eThekwini municipality have questioned the ANC's decision to ask embattled Durban mayor Zandile Gumede to take leave of ...
Politics
2 years ago

The South African Communist Party (SACP) in KwaZulu-Natal has for embattled eThekwini mayor Zandile Gumede to be subjected to the ANC’s integrity ...
Politics
2 years ago