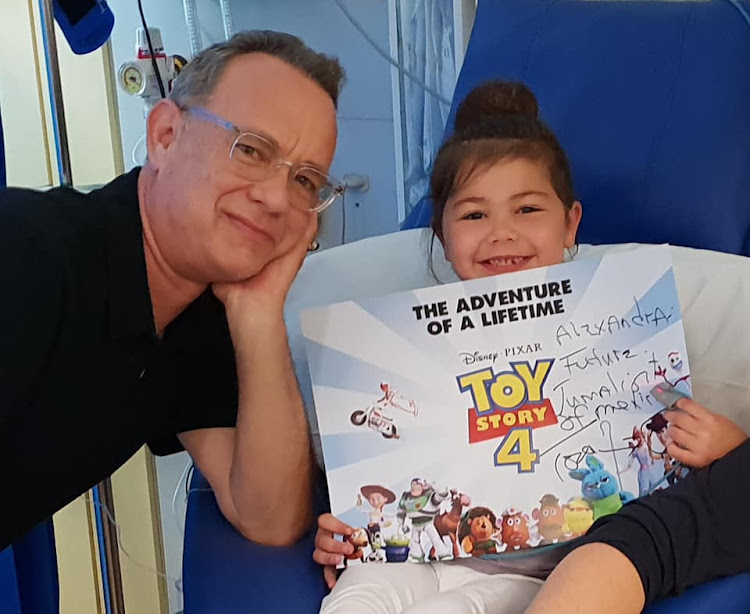 For six-year-old Capetonian Alex Taljard, there couldn't have been a more exciting visitor at her London hospital bedside.

Toy Story 3 is Alex's favourite movie and the visitor was Tom Hanks, the Hollywood star who provides the voice of Woody.

"He did a few lines from the movie for her in Woody's voice, which she enjoyed very much," said Alex's mother, Lisa MacLeod.

The little girl, who has a rare kidney disease, is part of a medical trial in London and her family lives there for prolonged periods so she can receive treatment three times a week at Evelina London Children's Hospital.

"On Monday, we were told by the matron that a special visitor was coming to meet some children, and Alex was invited to a sneak preview of Toy Story 4, which opens in cinemas this Friday," said MacLeod.

With three months to go until the fourth instalment in Pixar's 'Toy Story' franchise hits theatres, the movie now has its first full trailer, giving ...
Lifestyle
2 years ago

"Hanks spoke with me about Alex's condition and her treatment, and revealed that his own father was on dialysis for many years after losing both his kidneys (as did Alex) to kidney disease, so he had a deep and personal understanding of the extreme difficulties kidney patients face."

Alex was diagnosed with focal segmental glomerulosclerosis (FSGS) when she was 18 months old, and lost her kidneys. She underwent surgery in Cape Town last year when her grandmother, MacLeod's mother Jenni, donated a kidney to her.

The operation was successful, but the FSGS returned and began affecting the new kidney.

"We were invited to take part in a medical trial at the Evelina, where a new form of dialysis machine, the Liposorber apheresis machine, is being used to treat FSGS with some success," said MacLeod, who is head of digital for TimesLIVE, owned by Tiso Blackstar.

She said Hanks's visit left her daughter with a broad smile.

"He is a lovely, kind and funny man, and deserves his reputation for being a genuinely nice Hollywood star," she said.

"He came and introduced himself and sat and chatted with Alex about the movies. Her favourite is Toy Story 3, which she has watched three times. 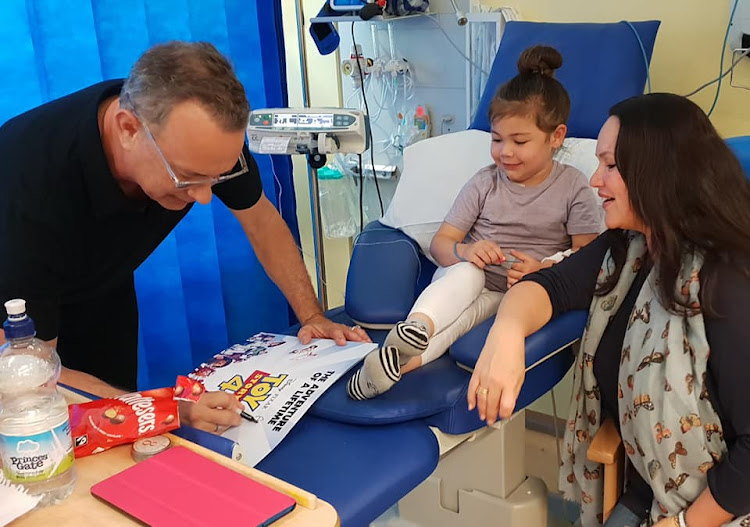 "She asked him if he was going to make Toy Story 5, and he explained that it is a long process to create these movies, so he wasn't sure if there would be a fifth, but he hoped so.

Hanks handed out Toy Story 4 goodie bags and visited other children in the ward before joining them for a preview of the new film in the hospital's "medi-cinema".

"Some of the children were wheeled in to the front row and watched from their hospital beds," said MacLeod.

"Alex loved the movie and highly recommended it, and will be going to watch it again this weekend with her cousins Isobel and Josh."

Alex also met the mayor of London Sadiq Khan on a visit to the Evelina a few months ago.

WATCH | First look at 'Toy Story 4' - and its newest star

Coming in 2019 — nine years after the last installment — 'Toy Story 4' now has a first teaser trailer featuring favourite characters from the ...
Lifestyle
3 years ago

You're never too old for a Toy Story sequel.
TshisaLIVE
3 years ago