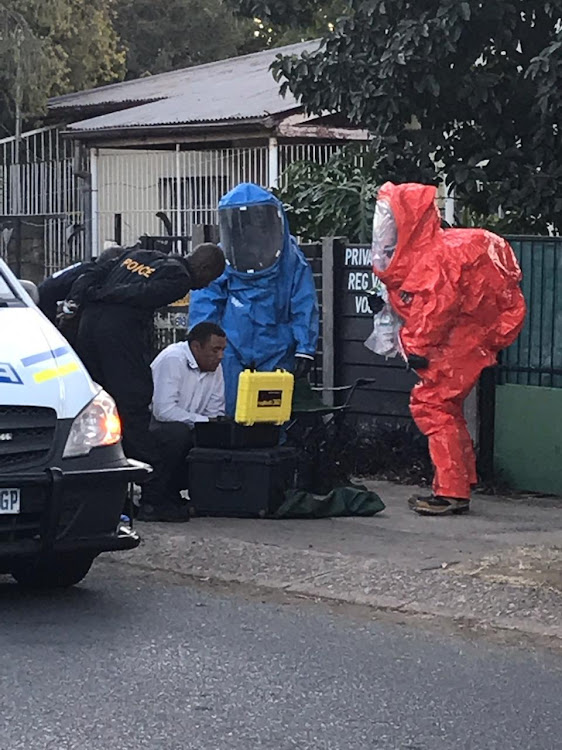 Police conduct a field analysis of substances believed to be arsenic and cyanide seized from a house in the Moot in Pretoria.
Image: Graeme Hosken

Police sealed off a house in the Moot in Pretoria on Sunday after discovering large amounts of substances suspected to be poison.

A police source on the scene told TimesLive that substances suspected to be cyanide and arsenic were found at the house during a raid for firearms and ammunition.

Police spokesperson Kay Makhubela would only say he was aware of an operation being underway but could not yet provide any details.

A TimesLIVE reporter on the scene first witnessed police investigators outside a flat at a two-storey building in Pretoria West where nearly 1,000 rounds of police-issued ammunition were seized.

Police said a 28-year-old man and six other people, including two women, were taken in for questioning.

After the raid on the flat, police and members of the national intervention unit proceeded to a house in the Moot, where at least 15 rifles and other firearms were recovered.

It was here that forensic investigators were suited up and briefed on the location of suspected cyanide and arsenic at the house. 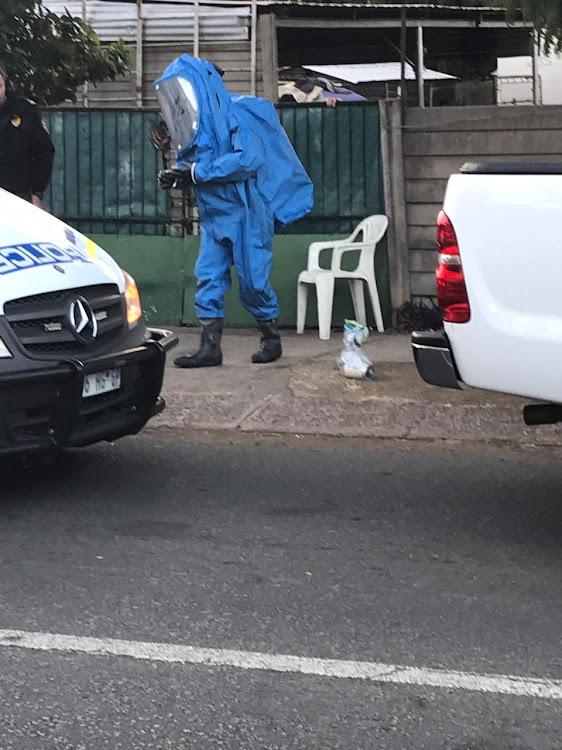 A SAPS forensic officer leaves a bagged container found inside a house after a raid in the Moot in Pretoria.
Image: Graeme Hosken

Neighbour Thomas Mahlangu told TimesLIVE he was surprised by what had happened.

“I run past here every day. It's a quiet neighbourhood.

“I never expected something like this would happen here. I know the old man who lives here. We greet every time we see each other.

"He was an active community member and used to support anti-crime initiatives years ago.”

Mahlangu said he did not know what had happened since then.

“He has gone quiet and was apparently ill. It's scary to see all these police officers here and hear that they found guns and poison."

Police have stormed several homes and flats across Pretoria seizing two arms caches, including nearly 1,000 rounds of police-issued ammunition and 16 ...
News
2 years ago

Cop arrested after being linked to 2016 Westbury gang murder

Gauteng police have arrested one of their own after an officer was linked to a gang shooting during the murder trial of Westbury gang leader Leroy ...
News
2 years ago

The anti-gang unit seized an arsenal of firearms and ammunition and made two arrests after a day of chaos on the Cape Flats.
News
2 years ago