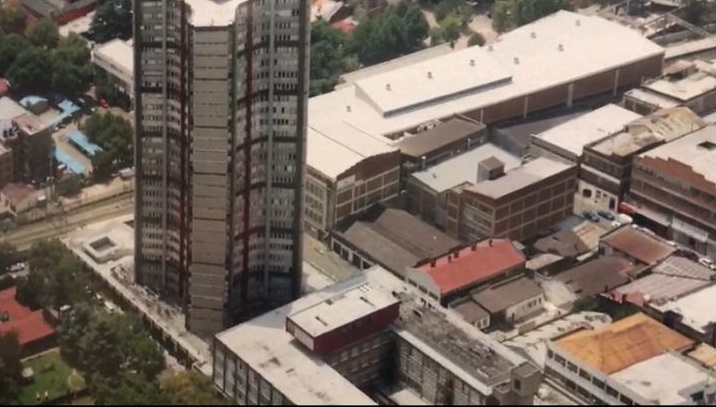 A photo of the high-rise 120 End Street apartment block in Doornfontein, Johannesburg, is on display inside the offices of The Affordable Housing Company (AFHCO).
Image: Emile Bosch

Since 2017, at least one resident of a block of flats in Doornfontein, Johannesburg, where a woman died at the weekend, had tried to warn the management company about the malfunctioning of lifts at the building.

This is the claim from a tenant at the high-rise building where a woman suffered fatal head injuries after a lift rapidly ascended to the 26th floor. A second person was injured.

Tenant Bea Campbell-Cloete told TimesLIVE that she had lodged a complaint with Africa Housing Company (AFHCO) at the end of 2017 to alert them about the lifts. AFHCO manages the block of flats.

"I said to them that the lifts are constantly down, they are constantly stuck. They stop in between floors, going up or coming down. Please can somebody do something about this?" she said.

Campbell-Cloete said she sent a follow-up email in January 2018 after receiving no response from AFHCO.

"There were a number of times where we phoned and told them the lifts are down or that one stopped midway."

Correspondence between herself and AFHCO was shown to TimesLIVE. Seemingly, the only response Campbell-Cloete received was an automated message on December 14 2017 saying that a "skilled customer services representative" had been notified of her e-mail and would respond within 24 hours.

She rented an apartment on the 26th floor - the same floor where the woman died on Sunday.

An email sent by Bea Campbell-Cloete dates back to 2017.
Image: Sceengrab

AFHCO said in a statement that the building was inspected earlier this year and was "compliant".

ER24 spokesman Ross Campbell said the lift had ascended rapidly and come to a stop above the 26th floor of the building. The woman suffered a critical head injury.

Campbell said a second person was able to crawl free through the gap between the top of the interior door and the bottom of the lift door. He was transported to hospital by another ambulance service.

"Paramedics on the ground worked out that the lift went up from the 16th floor to the 26th floor," Campbell told TimesLIVE on Monday.

The entrance of the flats is inside a shopping complex that includes Shoprite and the Gym Company.

A woman believed to be in her 40s was killed when a lift 'failed' in a highrise building in Doornfontein, Johannesburg, on Sunday morning, paramedics ...
News
2 years ago

"This recently renovated building offers apartments in a well-managed building that are affordable and modern, with 24-hour security, biometric access control, CCTV cameras on each floor, central security control room, two-plate stove, DStv connectivity, and your very own bathroom," the advertisement reads.

Campbell-Cloete was busy moving out when the lift incident occurred.

"When we came around the corner it was just ambulances and fire brigade everywhere.

"I thought, 'Did they mug somebody, was someone shot, was there a robbery or what is going on?'" she said.

She said that when she and her husband arrived in the basement, they noticed that three of the lifts were not working.

Campbell-Cloete said the three lifts were specifically for the high-rise apartments.

"When we got off on the 26th floor it was just people everywhere. They said somebody was stuck in the lift. They were trying to reach the lady in the lift.

"It was so sad, because the people who were standing there were saying to me, 'Did it have to come to this?'

"There are certain times when a lot of the lifts are down. For two months one lift would be constantly stuck on B2," she said.

Francis Bubb, a 75-year-old pensioner, is unable to leave her flat on the fifth floor of her retirement village because the elevators have been out ...
News
3 years ago

AFHCO said in a statement on Monday afternoon that the safety of tenants remained their number one priority and that they were "working closely with the investigative authorities to ensure that the facilities are safe to use".

"At this stage it is unclear exactly what transpired and we have appointed an independent lift consultant to conduct an investigation. The consultant will work with the department of labour and the company that supplies and installs the elevators, and maintains them on a monthly basis, to determine the nature and cause of the accident," AFHCO brand manager Nomfundo Mwelase said.

Mwelase said the use of the elevator and the other two lifts servicing the high-rise section of the building had been suspended until further notice.

"As a precautionary measure, the remaining lifts to the low-rise section of the building will also be tested to ensure safety."

She said the lifts were maintained in terms of a comprehensive maintenance contract with the installer of the lifts.

The prescribed scheduled maintenance included monthly checks, while corrective maintenance was undertaken as frequently as required.

"In addition, the lifts undergo a 24-month inspection by an independent specialist lift consultant as required by the department of labour."

Mwelase said the complaints received in the past had been "in respect of minor operational occurrences common with lifts".

The last safety inspection was done in February 2019 and the lifts were certified as being fully compliant, she said.

Seven people were killed when an under-construction building in Cambodia collapsed early on Saturday, an official said, as rescuers struggled to ...
News
2 years ago

A man has died after he was crushed beneath refuse bins at a business in City Deep, Johannesburg, on Wednesday.
News
2 years ago