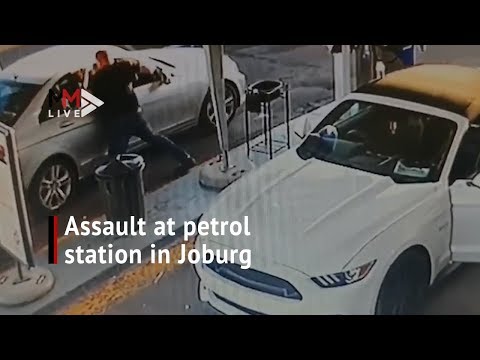 A 38-year-old pastor was left traumatised after he was beaten up and called the k-word at a Johannesburg petrol station.

Ron Rambebu said he was attacked by a man at an Engen garage in Horizon Park, in Roodepoort on the West Rand. Videos of the incident have gone viral on social media.

In the first video, the alleged attacker clad in a black Daniel Hechter T-shirt is seen paying for items bought from inside the garage shop. In the second video, Rambebu is seen being approached by the man near the petrol pumps. The man punches Rambebu several times through his car's window.

Rambebu drives off, while the man and his friend wait at a white Ford Mustang. When Rambebu gets out of his car, the men drive off.

Rambebu said he went to the garage, which is not so far from his home, last week Friday for fuel. He said that when he stopped at the garage, he noticed the Mustang but there was no one at the car.

"After I finished, I paid and started driving. The next thing, I just felt punches coming through my window. At first I thought I was being hijacked or something was falling on top of me, and I stopped.

"These guys were speaking Afrikaans and kept punching me. When I wiped my face, I saw it was just blood coming out," he said.

The full-time pastor of Greater Glory International Ministries said he parked his car and got hold of a wheel spanner from a place which fixed tyres at the garage.

"As I turned, they started driving off. I tried to chase them, but I was too late."

Rambebu said he went into the garage to get the CCTV footage and to ask the petrol attendants what had happened.

"They told me that those people said something about my EFF cap that I was wearing and that they were calling me the k-word. I didn't respond, because I didn't hear them," he said.

He said he went to the doctor and opened a case at the Roodepoort police station.

"I want the guys to be arrested, because I am angry and wanted to fight back - but I am a pastor and didn't want to go to jail. Let the law take its course."

Police spokesperson Capt Kay Makhubela confirmed that an assault case had been opened.

Makhubela said they were investigating but no arrests had been made.