While other banking-related crimes increased in 2018, there were drops in cash-in-transit (CIT) heists by 22% and ATM attacks by 7%.

"We are pleased that cash-in-transit (CIT) robberies decreased by 22% from 376 to 292 incidents from 2017 to 2018. Cash losses here also showed a decrease of 22% for the same period," the South African Banking Risk Information Centre (Sabric) CEO Kalyani Pillay said at the launch of its 2018 crimes stats in Sandton on Wednesday.

"ATM attack incidents using explosives increased by 26% during 2018 when compared with  2017, however losses decreased by 15% for the same period. Although there was an increase in recorded attacks during 2018, most (70%) of them were unsuccessful and may have been perpetrated by inexperienced criminals," Sabric said in its report.

The most common violent crime was customers who were robbed after drawing money from ATMs.

Phishing vs vishing vs SMishing

Phishing e-mails ask users to click on a link in the e-mail which will direct users to a fake website to lure users into entering their financial information;

Vishing is when a fraudster calls customers posing as a bank official or service provider to manipulate them into disclosing their financial information; and

SMishing is when criminals send an SMS pretending to be from the bank, requesting their financial information.

Although offenders used many methods to rob bank customers, the most common was where offenders followed their victims and robbed them of cash which they had withdrawn at a bank branch en route to their home or office, Sabric said.

"A variation of the 'follow home' modus operandi is where the victim is lured into a motor vehicle under the pretext of being offered a lift. In some incidents perpetrators use a minibus and pretend to be the driver."

More than six in 10 (62%) violent robberies happened in Gauteng, which has the highest concentrations of bank branches and ATMs, followed by KwaZulu-Natal with 8%.

Pillay said criminals "will take every opportunity" to steal money from bank customers.

"We have seen a sharp increase in vishing incidents, where criminals phone bank customers, leading them to believe that they are speaking to the bank or a legitimate service provider and use social engineering tactics to manipulate them into disclosing their confidential bank card details, as well as other personal information," Pillay said.

"Criminals are adept at psychology and will use social engineering tactics to exploit any human vulnerability in order to get information such as PINs and passwords."

Sabric was formed by SA's banks to help the industry fight crime.

Digital banking crimes increased by 75.3% from 13,389 incidents to 23,466 - in which R262m was stolen. These crimes were committed via phishing, vishing, SMishing or e-mail hacking, Sabric said. 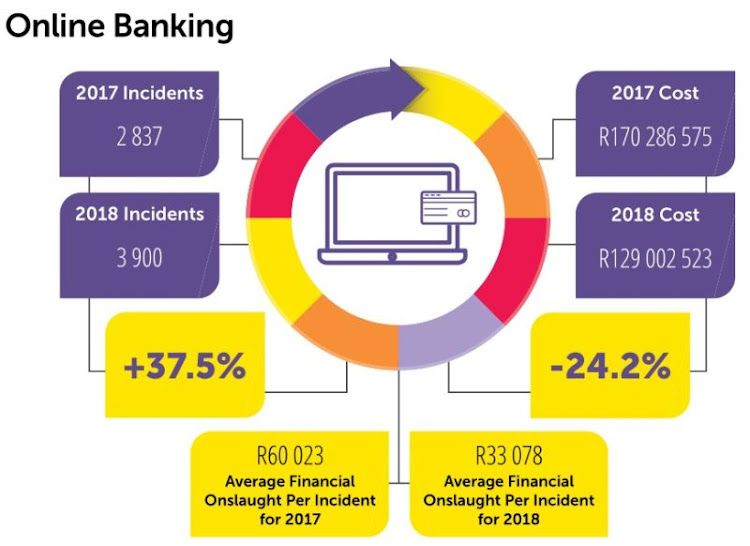 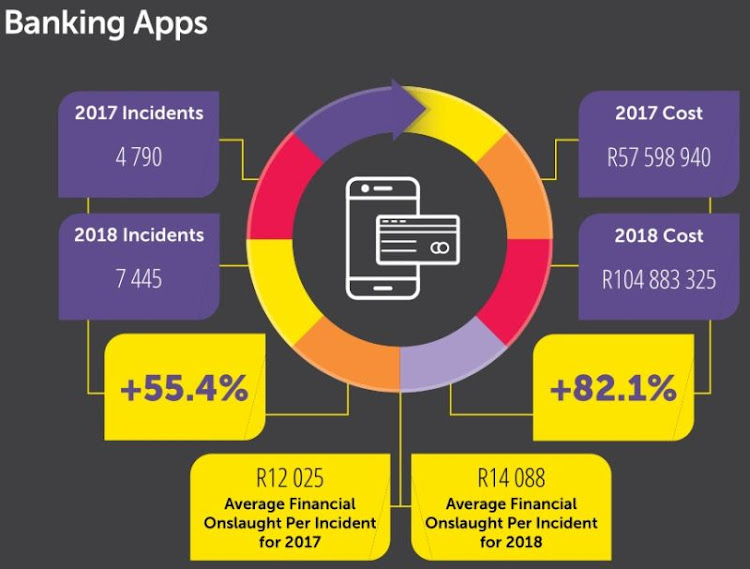 Meanwhile, the Institute of Security Studies (ISS)’s Karen Allen wrote in an analysis published on Wednesday that the Cybercrimes and Cybersecurity Bill of 2018 is broadening the scope of cyber offences from earlier legislation and allows for the extradition of cyber criminals.

"At a recent conference on cybersecurity hosted by the South African Police Service, plans for a 24-hour rapid response unit were enthusiastically debated. However until it becomes a fully funded reality, law enforcement agencies and the banking sector are relying on informal networks to try to prevent the country from becoming a safe haven for cyber criminals," Allen wrote.

SABRIC’s tips for keeping you safe when using ATMs:

Tips to keep you safe from Phishing:

Tips to keep you safe from Vishing:

Tips for protecting your personal information:

Mondays are not good days for stokvel deposits - SABRIC warns

Beware the 'money bomb' and other festive season scams

The SA Banking and Risk Information Centre (SABRIC) has warned the public not to let their guards down during the festive season, as criminals are on ...
News
3 years ago