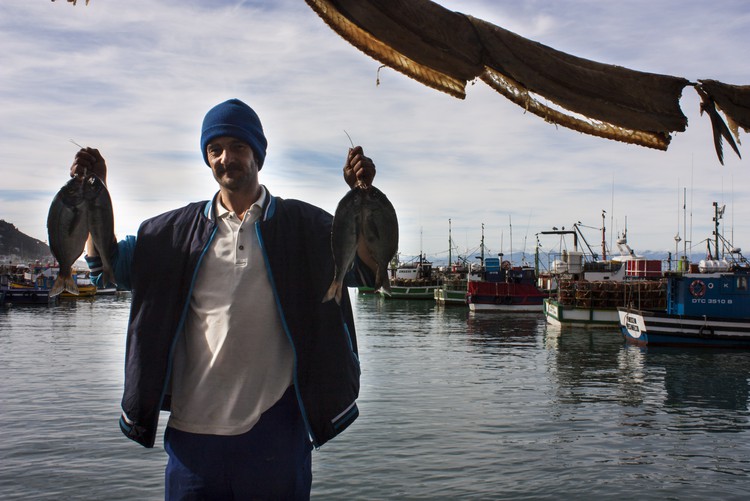 Pollution on our plate: Kalk Bay fisher Michael Howell holds up a brace of Cape bream. A recent scientific study has found these and other fish landed at Kalk Bay contain pharmaceutical and industrial chemical compounds in their flesh as a result of ocean pollution.
Image: Steve Kretzmann

The ocean around Cape Town is so polluted that pharmaceutical and industrial chemical compounds are accumulating in the flesh of fish caught off the coast.

Scientists from the University of the Western Cape’s chemistry department have found that fish caught by small scale commercial fishers in Kalk Bay are contaminated by antibiotics, pain killers, antiretrovirals, disinfectants, and industrial chemicals.

In their peer-reviewed paper, Senior Professor Leslie Petrik at the University of Western Cape’s Chemistry Department, and Cecilia Y. Ojemaye tested for 15 different chemical compounds in the fish fillets, gills, liver, and intestines.

These include the analgesic/anti-inflammatories Diclofenac and Acetaminophen, the antiepileptic drug Carbamazepine, the antibiotic Sulfamethoxazole, the disinfectant Triclosan, as well as various industrial chemicals found in pesticides, flame retardants, and personal care products. These were all present in various parts of the fish tested.

“Overall, Diclofenac had the highest concentration out of all the pharmaceutical compounds”, notes the report, while the antibiotic Sulfamethoxazole was detected in at least one part of all the fish species (fillet, gills, liver, and intestine).

The water and sanitation department (DWS) is taking legal action against the Inxuba Yethemba municipality in the Eastern Cape for allegedly polluting ...
News
2 years ago

Each chemical compound has a different acute and chronic risk associated with it, says Petrik.

The presence of pharmaceutical compounds in fish is due to untreated or poorly treated sewage flowing into our ocean. This is because drugs are not wholly metabolised in the body.

Storm water is a probable source of pesticide and industrial chemical pollution. This study, and others to which the authors refer, shows that these chemical compounds accumulate, not only in fish but also in our bodies, and in other marine organisms.

Cape Town pumps about 37-million litres of sewage out to sea per day, from marine outfalls in Green Point, Camps Bay, and Hout Bay. The only treatment at these pump stations – confirmed by City authorities - is that the raw sewage is pumped through a grid to remove solids such as tampons and grit. The sewage pumped out at Green Point includes waste from the Christiaan Barnard Memorial Hospital, as well as all medical and light industrial facilities between Salt River and Bantry Bay.

While there are no marine outfalls in False Bay, both the Strandfontein and Zandvliet waste water treatment works discharge into the bay. The treated water is supposed to meet minimum standards for the presence of microbial bacteria such as E.coli and Enterococcus, which are indicator organisms for the presence of other microbes.

Historically, coastal water quality tests - the results of which used to be presented along with inland water quality data at subcouncil meetings twice a year until 2013 – taken near these outlets sometimes failed the minimum guidelines. This indicates these sewage works have not always treated the effluent to the necessary standards, or that storm water containing high levels of sewage is running out to sea.

Environmental justice group groundWork and a Mpumalanga community organisation have launched a court application in which they demand that government ...
News
2 years ago

The City has said that no testing or treatment for chemical compounds, such as those indicated in Ojemaye and Petrik’s study, is undertaken.

Water channelled from roads and gutters into storm water drains, which then flow either directly to the sea, or into streams and rivers which discharge to the ocean, are also heavily polluted.

This is despite the national Department of Environmental Affairs regulations that storm water pollution must be treated at source.

The most recent sewage spill into the Zandvlei estuary, which flows into False Bay at Muizenberg, was reported by Zandvlei nature reserve manager Kyran Wright to have occurred on May 9, resulting in the entire water body being closed for recreational purposes on May 15 and only reopened on May 31.

A sewage spill into the Sand River canal, which flows into Zandvlei, was also reported on April 24.

These are but the latest reported incidents of sewage pollution into the estuary, which is a nursery for fish in False Bay.

It is not clear how often coastal water quality at Muizenberg, Fish Hoek, Strandfontein and other testing sites on the coastline fail the minimum guidelines for the presence of indicator organisms such as E.coli and Enterococcus, as the City no longer makes the results of its tests available to the public.

Repeated requests by GroundUp to the City over the past 18 months to provide the results of the inland and coastal water quality tests conducted on a monthly and twice-weekly basis respectively, have not yielded any results.

Limberg has said the results of the City’s inland and coastal water quality monitoring “are presented at various public opportunities such as catchment management fora meetings, Protected Area Advisory Committees (PAAC), as well as monthly to the Water and Sanitation Department Director.”

But the chairperson of the Zandvlei Trust, Peter Kruger, who is present at such meetings, said no water quality reports are received by the Trust.

The Fish Hoek Valley Ratepayers and Residents Association has received water quality monitoring data from the City, but had to submit a Public Access to Information Act request, and sign a non-disclosure agreement. Thus the information cannot be shared.

The most recent communication from Limberg’s office to GroundUp, earlier this month, was: “The City is in the process of compiling this information for a new coastal water quality report that will be presented to Council structures during the early part of the coming 2019/20 financial year. We can share a copy of the report as soon as it’s been through the relevant Council committees. If all goes according to plan this should be around August.”

Attempts to get further information from Limberg last week were unsuccessful.

If ocean pollution means fish are eating plastic, aren't we eating it too?

The latest water quality reports available are from 2016, in the State of the Environment Report published by the City in 2018. There is no detail in the data, only averages. These show that Fish Hoek, Muizenberg, Mnandi, Monwabisi, and Kalk Bay Harbour beaches, among others, failed the minimum guidelines for water quality averaged over the year.

On the Atlantic side, Three Anchor Bay (between Mouille Point and Sea Point), Saunders Rocks in Sea Point, and The Kom in Kommetjie also failed averaged minimum guidelines.

Scientists from UWC, Stellenbosch University, and UCT, have also repeatedly raised concerns about the dangerously high microbial levels in the lower Kuils River, which flows into False Bay via the Eersterivier near the north eastern corner of the bay. The City has continually denied the pollution is caused by the discharge from the Zandvliet sewage works, but has not been seen to deal with the unacceptably high microbial levels found in the river. Instead, officials from the City water and waste services department launched a scathing attack on the scientists themselves in the Daily Maverick, but failed to resolve the question of pollution levels.

Students involved in a South African–Norway Cooperation on Ocean Research (SANOCEAN) study under senior lecturer in the department of community health at Stellenbosch University, Dr Jo Barnes, have recently tested the levels of E.coli in Fish Hoek storm water systems.

The results of tests for the number of E.coli colony forming units (cfu) per 100ml at four sites tested on 30 May were:

Above 10cfu/100ml is high risk for drinking water, while above 2,000cfu/100ml is a high risk from full or partial contact with such water. E.coli can cause gastroenteritis, resulting in severe diarrhoea, which can be fatal for infants, young children, and adults with compromised immune systems. Open wounds or cuts can also become infected.

The first comprehensive study on African penguin parasites was just completed, and the results raised no red flags - for now.
News
2 years ago

The Fish Hoek sites 2, 3, and 4 contained E.coli levels consistent with raw sewage, said Barnes at an academic workshop in June. Site 1 was clean because there was a major leak from a drinking water pipe which was flushing the storm water system at that point.

Results from sites on the Plankenbrug River flowing through Kayamandi near Stellenbosch, where students from the University of Chicago took samples in 2018, showed E.coli counts ranging from 600,000 to over six-million cfu/100ml.

This showed that storm water systems were acting as “a second sewerage system” said Barnes.

Even more alarming was that 100% of the E.coli organisms were found to be resistant to the antibiotic amoxicillin. And while the microbial resistance to ciprofloxacillin at testing sites on the Plankenbrug River was at 58% in 2003, it had also risen to 100% resistance.