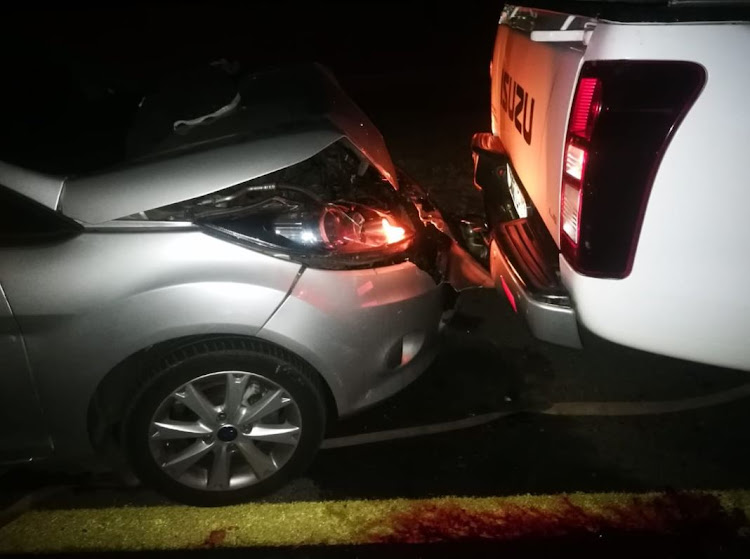 Four people died in a crash in Potchefstroom near Ikageng in the evening on Saturday.
Image: @ER24EMS via Twitter

Four people died in a crash near Ikageng in Potchefstroom on Saturday night.

"It is alleged that the driver of a Tata bakkie was crossing the N12 at the last entrance of Ikageng [Sarafina Road] into the N12, when he collided with a Hyundai vehicle that was travelling from Klerksdorp towards Potchefstroom.

"Due to the collision, an unconfirmed number of people were flung from the back of the bakkie and landed on the road. Allegedly, another vehicle, a Kia, collided with some of the people that were on the road," said police spokesperson, Col Adéle Myburgh.

The accident, which happened around 7pm, claimed the lives of two males and two females who have not yet been identified.

"Four people died on the scene while seven other people were taken to hospital with serious injuries.

"At this stage, the deceased have not been formally identified. Due to the collision, the road was closed for approximately five hours," said Myburgh.

Police said they were investigating a case of culpable homicide.

Four people were killed when a taxi and a truck collided on the N3 in KwaZulu-Natal on Thursday.
News
3 years ago

There should be more traffic officers on the country’s roads, their employment conditions should be improved and they should be on the roads 24 hours ...
Politics
3 years ago

It's been the 'bloodiest weekend' on the country's roads, says traffic authority

"This was the bloodiest weekend we have experienced and it again points to recklessness and negligence by drivers."
News
3 years ago