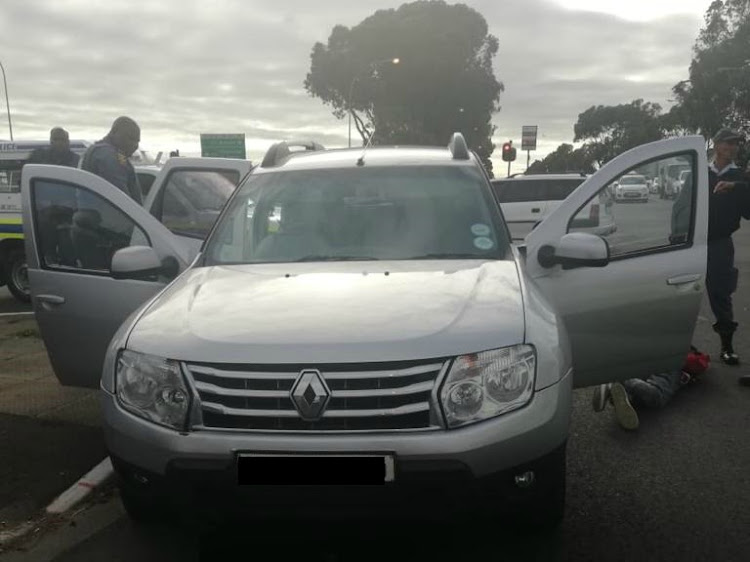 A taxi driver was stabbed and robbed of his silver Renault Duster, allegedly by two teenage passengers who have since been arrested in Goodwood, Cape Town.
Image: SAPS/SUPPLIED

A taxi driver was stabbed and robbed of his vehicle, allegedly by his two teenage passengers, in Goodwood, Cape Town, over the weekend.

"Shortly after a taxi driver was stabbed and robbed of his silver Renault Duster, our Flying Squad members arrested the two perpetrators. Yesterday afternoon the taxi driver was attacked in his vehicle by his two passengers in Goodwood," said police spokesperson Lt-Col Andrè Traut.

Traut said the duo, aged 17 and 19, fled in the vehicle towards Parow where Flying Squad members intercepted them in Fransie van Zyl Drive.

The two were arrested on charges of attempted murder and possession of a stolen vehicle. They will appear in the Parow magistrate's court soon.

In an unrelated incident, two suspects, aged 28 and 29, were arrested in Riebeeck Kasteel on Friday evening for being in possession of 2.8kg of dagga.

The suspects were apprehended during an intelligence-driven operation and will make a court appearance on Monday, according to Traut.

Heavily armed men dressed in fatigues and balaclavas formed one of several security cordons around President Cyril Ramaphosa when he arrived in ...
Opinion & Analysis
3 years ago

Two young men were arrested for allegedly raping a 75-year-old woman in Willowvale, Eastern Cape over the weekend, police said on Tuesday.
News
3 years ago

A young man who was mugged in Hillbrow, Johannesburg, on Tuesday morning is being asked to report his attack to the police, who are trying to combat ...
News
3 years ago