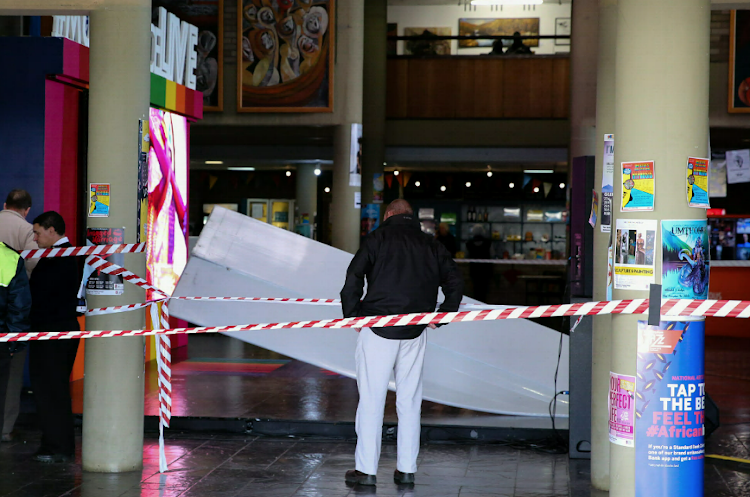 No one was injured when a section of the roof at Settlers Monument in Makhanda collapsed while journalists were being briefed below.
Image: Werner Hills

Sections of the Settlers Monument roof were on Monday blown off by strong winds in Makhanda, where the National Arts Festival is running.

Sheeting fell down the equivalent of some six storeys and landed alongside the Sundowner Concert stage in the centre of the large building, apparently due to the force of the winds.

No injuries were reported but the sheeting came loose just minutes into an annual media briefing where festival CEO Tony Lankester was welcoming and introducing journalists to festival stakeholders.

A Herald journalist who was at the scene heard a large bang as the sheeting cascaded to the floor below, leaving a large gap in the ceiling.

The Sundowner Concert stage is where there are daily performances attended by large crowds at 5pm.

Lankester immediately ran to the scene while security officials cordoned off the area.

A magician accidentally shot his co-performer in the head with a crossbow when "magic show" went horribly wrong at the National Arts Festival (NAF) ...
News
2 years ago

Makhanda forever! Grahamstown by any other name is just as charming