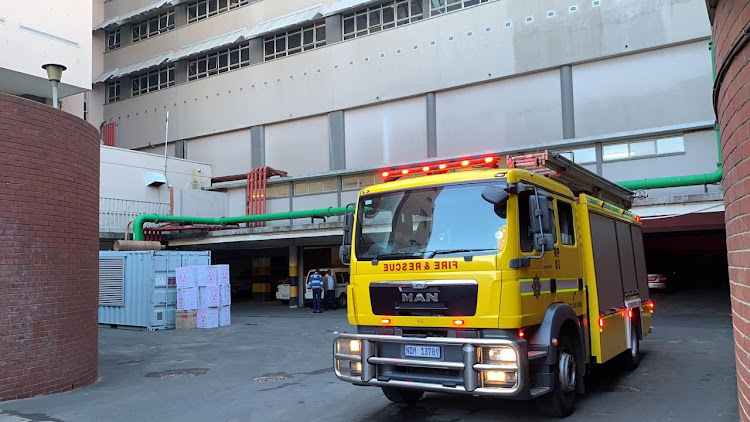 A fire truck outside Durban's Addington Hospital, where a fire broke out on Tuesday.
Image: Jackie Clausen

Twenty-five newborn babies and nine children were among the 84 patients evacuated after a "mysterious fire" broke out at Durban's Addington Hospital on Tuesday.

"According to hospital management the fire broke out in the fire-escape area on the seventh floor, just after 8am.

By then, strong clouds of smoke had begun spreading to the hospital's wards on the ninth and 13th floors," the health department said in a statement.

The fire that broke out on Tuesday morning on the 7 th floor of Addington Hospital was quickly contained @TimesLIVE pic.twitter.com/pEsWG0uMcG

While firefighters were on their way to the scene, hospital management started implementing the facility's emergency evacuation plan.

"No fewer than 25 mothers and their newborn babies; nine children in the children's ward on the 13th floor; and 20 patients who needed gynaecology services, had to be evacuated due to the strong smoke."

The department said no injuries were reported and the cause of the fire was not yet known.

"We will follow-up on the progress of investigation, and if there is any evidence of foul play, the law will have to take its course," said Simelane-Zulu.

She said challenges regarding the functioning of the lifts at the hospital were being dealt with.

It was reported last month that the majority of the hospital's were not functioning for up to 18 months.

"This morning's fire took place near a lift that is used for refuse removal, which was not operational at the time, and was due for repairs.

"Regrettably, the lift has now suffered more damage due to the seepage of water during the fire-extinguishing process. Plans to repair the lift will have to be shelved until the level of water damage has been fully ascertained," she said.

The recent discovery of a Durban builder's decomposing body in the ceiling of a hospital - two weeks after he was admitted with a broken leg - is ...
News
3 years ago

The KwaZulu-Natal health department says the replacement of an old underground generator at Durban’s Addington hospital - which resulted in patients ...
News
3 years ago