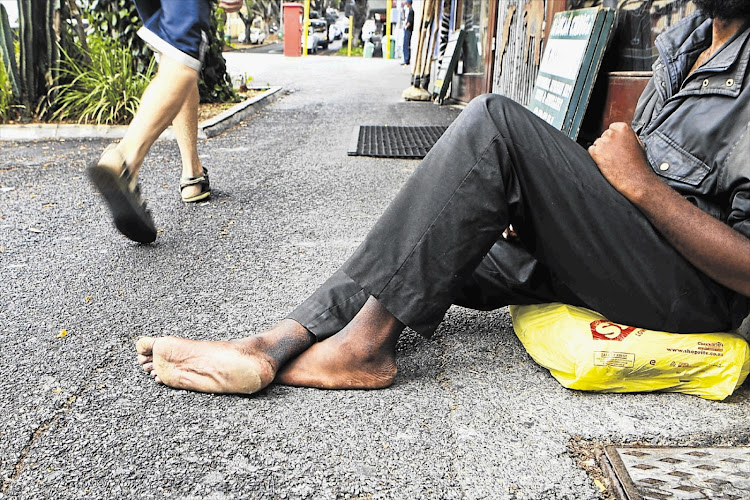 South Africans have taken to social media seething with anger after reports that the City of Cape Town is fining homeless people for allegedly "obstructing pedestrian traffic" and allegedly breaking other bylaws.

A News24 report on Monday revealed that homelessness in Cape Town may now come at a cost, following various complaints by residents, who felt that the city was not being consistent in enforcing its bylaws.

Law enforcement spokesperson Wayne Dyason denied that they were targeting the homeless, but said they are after anyone who violates the city's bylaws, which prohibit camping, noise, nuisances and setting up fires in undesignated areas.

Lighting a fire in an undesignated area will cost up to R1,500, while anyone obstructing pedestrian traffic could be fined R300.

Since the release of the report, many have taken to Twitter to express their frustration and anger towards the residents who complained about the homeless, and the city for the way it has handled the situation.

Cape Town law enforcement is also full of nonsense for even entertaining this. How do they suppose the homeless will pay these fines??
I’ve never heard of a more ineffective measure to dissuade or punish by-law infringement.

Wow, Cape Town is a country where the poor and homeless don't have a place. This is really sad.

Homeless people can’t pay fines, where will they get the money from?

Shouldn’t these resources of arresting those ‘breaking traffic laws’ be directed towards serious crimes?

A homeless person pays R1500 fine if they are caught sleeping in the lofty streets of Cape Town.

The freedom you fought for is being dragged through the mud.

How the fxck does Cape Town officials allow homeless to be given fines R1500 for obstructing pavements..like they have that amount lying around and choose to sleep on the streets than find a place of shelter to rent.

Offered accommodation where?? They are homeless which means they have no money!! This is so infuriating!!! 🤬😡 city of Cape Town working for the elite few!!! Would help if they actually provided houses!!! This madness needs to end!!

Fears for homeless, animals as cold fronts expected to hit SA from Tuesday

The South African Weather Service is worried about the country's homeless with two cold fronts set to hit this week.
News
2 years ago

Jenny Hanley was living on the streets, recycling to survive and turning other peoples' junk into "something pretty", when she met her husband and ...
News
2 years ago

Homeless shelter baas: ‘We install order through the sjambok’

A city-owned homeless shelter in Pretoria is being run by a rogue chairman who insists he was legitimately elected by a taxi association and is ...
News
3 years ago

Homeless shelter No 2 Struben Street is supposedly run by a partnership between the city and NGOs.
News
3 years ago

Man arrested for alleged attack on homeless man in Pretoria

A man has been arrested for allegedly attacking a homeless man in the Muckleneuk area ealier this year, police said on Friday morning.
News
3 years ago