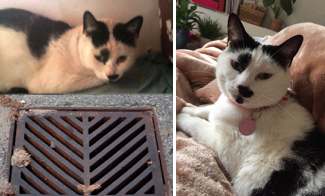 A cat that was dumped in a stormwater drain in Khayelitsha has found a happy home.
Image: Mdzananda Animal Clinic

Two years after a cat was dumped in a stormwater drain in Khayelitsha, Cape Town, it has finally found a happy home.

In 2017, two staff members of the Mdzananda Animal Clinic in the area were alerted by concerned community members who said they saw a man putting a small animal into a drain.

"I can only imagine what the cat felt when she was placed into that drain and the cover put over her head. She was half submerged in water. Fear is all I can think of," said Susan Wishart, the clinic's general manager.

After the cat was rescued, Wishart named her Storm.

Now, two years later, she has been adopted by Amy Lawrence, who says Storm couldn't be happier.

"She's affectionate and the best cuddler, which makes it very hard to get up in the morning," said Lawrence.

"She is a feisty lady of leisure and her favourite spot is in her window basket on a sunny day," she said.

When Newlands East, Durban, resident Iyron Lovedale first heard the faint cries of a newborn baby trapped in a storm drain, he thought it was a ...
News
3 years ago

Can you name all 54 African countries? This catchy track will help

US teacher Calid Bowen hopes his song 'Vacay' will inspire people to travel the African continent.
Lifestyle
3 years ago