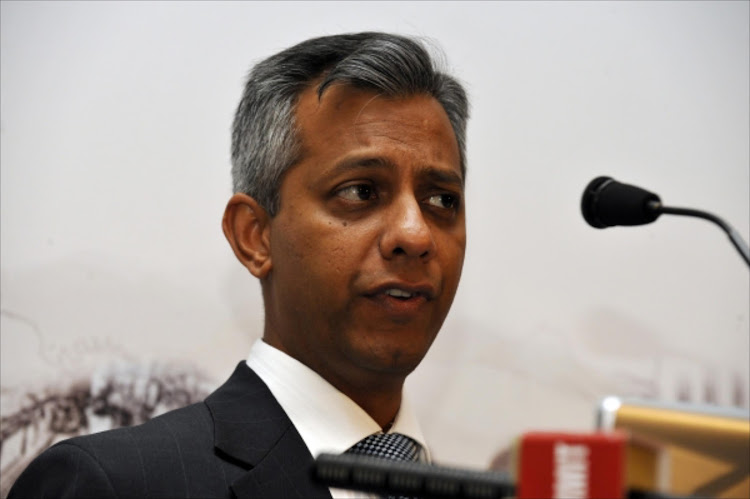 Former Eskom chief financial officer Anoj Singh has had his membership of the SA Institute of Chartered Accountants suspended for his role in the looting of the state utility.
Image: Robert Tshabalala

The SA Institute of Chartered Accountants (Saica) has suspended former Eskom chief financial officer Anoj Singh's membership pending the outcome of a disciplinary hearing against him.

This was after the board rejected his resignation as a Saica member, the accounting watchdog said.

Singh is alleged to have played a pivotal role in the looting of Eskom by the Gupta family and their associates.

In 2018, Saica announced that it had laid charges of misconduct against Singh. The charges allege that Singh failed to comply with relevant laws and regulations, and failed to avoid conduct he knew or should have known might discredit the accountancy profession.

They allege that Singh failed to disclose to the Eskom board of directors the true reason for the request by the Gupta-owned Tegeta Exploration & Resources for about R600m from Eskom.

There were three basic pillars upon which the model of state capture at Transnet was built.
Politics
3 years ago

On Thursday, Saica said it was postponing the disciplinary hearing after information recently become available in the public domain that implicated him.

It said in that light of that, Saica was considering the new information and would possibly be amending the charges against Singh.

“This necessitates a postponement of the scheduled disciplinary committee hearing, in order to avoid a piecemeal hearing and to ensure that all allegations against Mr Singh are fully investigated and dealt with at once,” Saica said.

Singh was meant to appear before the disciplinary committee from July 15-19.

In June, Singh was implicated during testimony at the state capture commission of inquiry for alleged corruption while at Transnet.

Transnet board chair Popo Molefe attributed the corruption at the state-owned company to three people: former CEOs Brian Molefe and Siyabonga Gama and Singh, who is the former CFO.

He described them as the “three key protagonists or architects of state capture at Transnet”.

The role of Transnet's treasury division was "highly diluted" when the state-owned company was negotiating its controversial procurement of 1,064 ...
Politics
3 years ago

A business case for the purchase of 100 locomotives was extensively changed by Transnet's executives to favour a Gupta-linked Chinese company, China ...
Politics
3 years ago