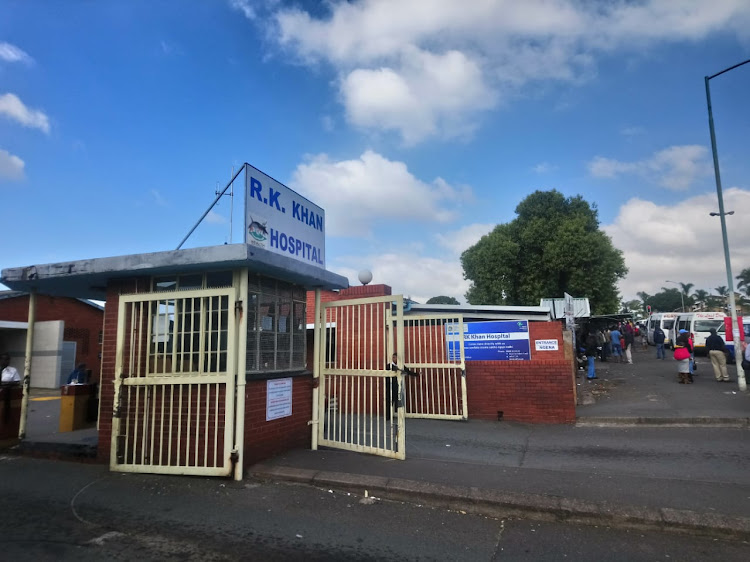 RK Khan Hospital in Chatsworth, south of Durban, has come under scrutiny following a video which went viral showing maggots in the mouth of a patient
Image: ORRIN SINGH

A civil society-led group comprised of concerned residents is calling for the board of RK Khan Hospital in Chatsworth, south of Durban, to be removed.

Members of the RK Khan's Action Committee (RKKAC), headed by Visvin Reddy, commonly known in his capacity as national convenor of PAPPI (People Against Petrol Price Increases), has labelled the public hospital a "death trap", where people come to die rather than get better.

He spoke to TimesLIVE outside RK Khan following a meeting between hospital personnel and the MEC for health in the province, Nomagugu Simelane-Zulu, on Monday which the group "hijacked".

The video images of a maggot infestation inside the mouth of a 52-year-old Durban man, who died this week, allegedly from neglect, will forever haunt ...
News
2 years ago

Their concerns have been fueled by outrage following news last week that a 52-year-old man, Sadek Ebrahim, who died, was found with maggots in his mouth after being admitted for an operation related to gangrene in his leg.

In a media statement, RKKAC said its members had embarked on an impromptu, unannounced visit to the hospital and held discussions with patients and nurses last week.

According to RKKAC, the following was allegedly seen and reported:

Reddy said they have given the MEC two weeks to respond to their calls to have the board disbanded, alternatively the community would assign its own board that would run parallel to the hospital leadership.

"We are calling on her to remove this dysfunctional board and replace it with one that is accepted by the community. Failing to do so will be met with sustained protest action until this demand is met."

He alleged that the hospital board was unknown and appointed covertly without any input from the community.

"They are ineffective and incompetent and must be replaced immediately. Because of this, they remain a toothless body serving only to be praise singers for the hospital and ignoring the many challenges that hinder proper healthcare," he said.

Leader of a newly former civil group - #RKKhans Action Committee - Visvin Reddy, has lambasted the dep of health. This after a video emerged of a man with #maggots in his mouth at the hospital. RKKAC have given the MEC two weeks to dissolve the board @TimesLIVE @yasantha pic.twitter.com/bwrd2N7mU7

Meanwhile, the chair of the hospital board, Reverend Cyril Pillay, is reported to have called for an "independent investigation" following Ebrahim's death.

Pillay said he sympathised with the family, saying the infestation should not have happened.

Simelane-Zulu said the staffing issue was a major problem for the province.

Simelane-Zulu said she was engaging closely with Premier Sihle Zikalala on how to properly staff the hospitals and clinics in the province. The biggest challenge that the province is faced with is the fact that we don't have money, and that is a fact."

She said the provincial government would need to pull funds from other departments in order to lend support to health.

Simelane-Zulu added that it was unacceptable and that no excuse would be valid for what had happened to Ebrahim.

She said health was a right afforded to every South African and that hospital staff and management took an oath to take care of those admitted to hospital.

A preliminary report from the department's investigation into Ebrahim's death is expected to be finalised this week.

Meanwhile his son, Azaad Ebrahim, said he would be taking legal action and seeking counsel from the South African Human Rights Commission.

Twenty-five newborn babies and nine children were among the 84 patients evacuated after a "mysterious fire" broke out at Durban's Addington Hospital ...
News
2 years ago

Newly appointed KwaZulu-Natal health MEC Nomagugu Simelane-Zulu plans on getting nurses from other areas to staff the Richmond clinic in the ...
News
3 years ago

KwaZulu-Natal health MEC Nomagugu Simelane-Zulu has launched an probe into the “suspicious” death of a 23-year-old mother and her unborn baby and has ...
News
3 years ago