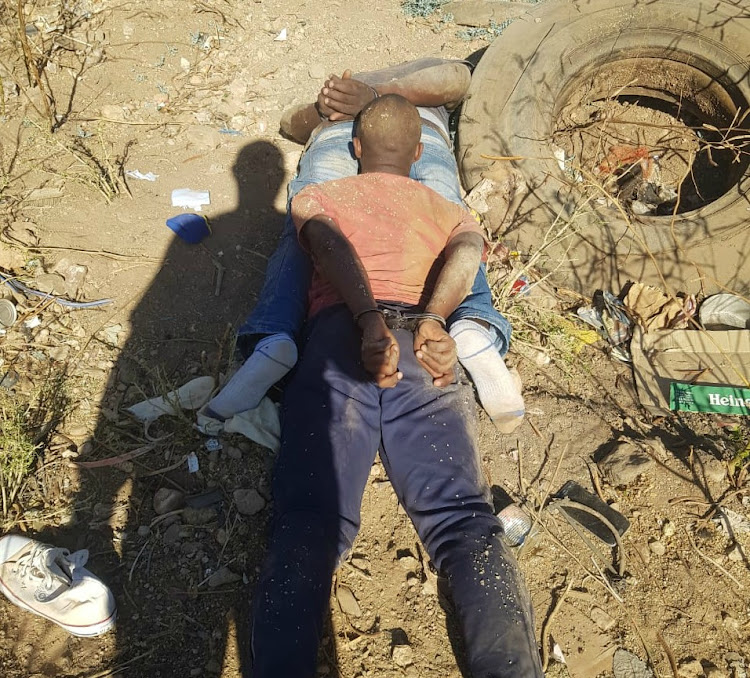 Two of the three robbery suspects who were arrested after the shootout with police in Burgersfort. Another suspect was shot dead during the shootout.
Image: SAPS

Police shot dead one suspect and arrested three others after the men had robbed a store in Burgersfort, Limpopo, on Monday.

The suspects were allegedly pulled off the road near Ga-Masha village, but they immediately started shooting at the police.

The police retaliated and one of the suspects was fatally wounded and his three accomplices were arrested.

Police spokesperson Col Moatshe Ngoepe said the identity of the deceased, the origin of all the recovered items, the possible linkage of the suspects to other criminal activities in this area and other areas, would be determined by the ongoing police investigations.

Ngoepe said the suspects, aged between 25 and 31, will soon appear before the Sekhukhune Magistrate's Court , to face charges of murder, business robbery, possession of prohibited firearms and ammunition and possession of suspected stolen property.

Checking up on a suspicious vehicle in Pretoria led police to a woman who was allegedly kidnapped by a man wanted for rape in Limpopo.
News
2 years ago

Police are investigating a case of murder after a woman, who ran a business selling pancakes, was found dead inside her burning house in Bloemfontein.
News
2 years ago