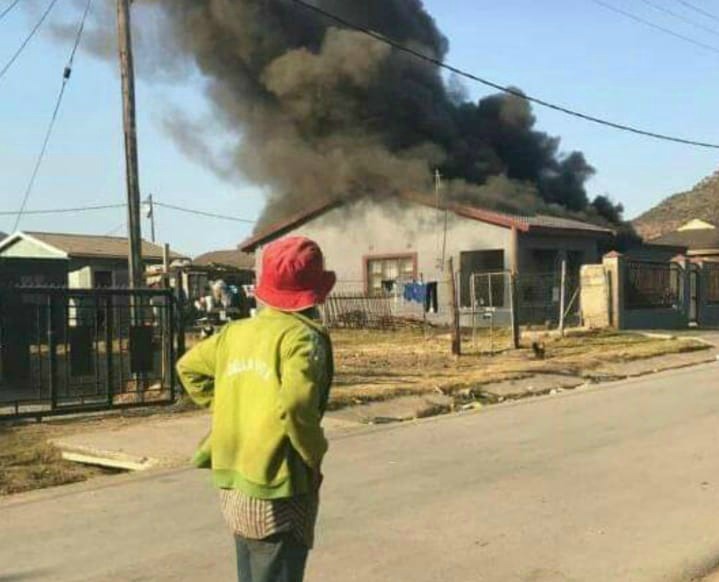 The home of former paramedic Sphelele "Sgumza" Mbatha was torched on Wednesday. Mbatha has been accused of operating a ponzi scheme.
Image: Supplied

A group of people looted and set alight the family home of a man who operated what is believed to be a Ponzi scheme in Ladysmith.

On Wednesday afternoon, Ladysmith firefighters were called to the house of former paramedic Sphelele "Sgumza" Mbatha.

Those responsible for the blaze are believed to be investors who have lost thousands of rands after Bitcoin Wallet, operated by Mbatha, "went online".

A community leader, who did not want to be named, told TimesLIVE that investors were taking the law into their own hands because Mbatha was unreachable.

On Tuesday night, a crowd of about 1,500 angry protesters gathered at the Ladysmith police station demanding to see Bitcoin Wallet employees.

They had apparently taken the employees to the police station, before police rescued them from the angry crowd.

The community leader told TimesLIVE that hundreds of people had queued outside the Bitcoin Wallet office to invest in the scheme over the past few months.

"They believed that they were going to be rich because the company promised 100% returns in just two weeks after investing. They wanted easy cash and then reality came crashing down on them," he said.

However investors "smelled a rat" almost a week ago when Bitcoin Wallet's office closed down. Mbatha reportedly said it was on the instruction of the local municipality.

However, the Alfred Duma local municipality subsequently issued a statement denying Mbatha's claim. Mbatha is alleged to have then told investors that the company had gone online and that they needed to upload their details to be paid out.

On Tuesday, Mbatha told Ladysmith's community radio station, Nqubeko FM, that hackers had infiltrated the website and stolen investors' monies. Investors have not been able to reach him.

"There are claims that he has fled from Ladysmith, but no one can really confirm. At this stage, the whole town is talking about Bitcoin Wallet. It's a sad state of affairs because the poor may have been taken for a ride," the community leader said.

About 1,500 angry investors gathered outside the Ladysmith police station late on Tuesday night demanding to see employees of an alleged ponzi scheme ...
News
2 years ago

Japanese cryptocurrency firm Tech Bureau Corp said about $60 million in digital currencies were stolen from its exchange, highlighting the industry’s ...
News
3 years ago