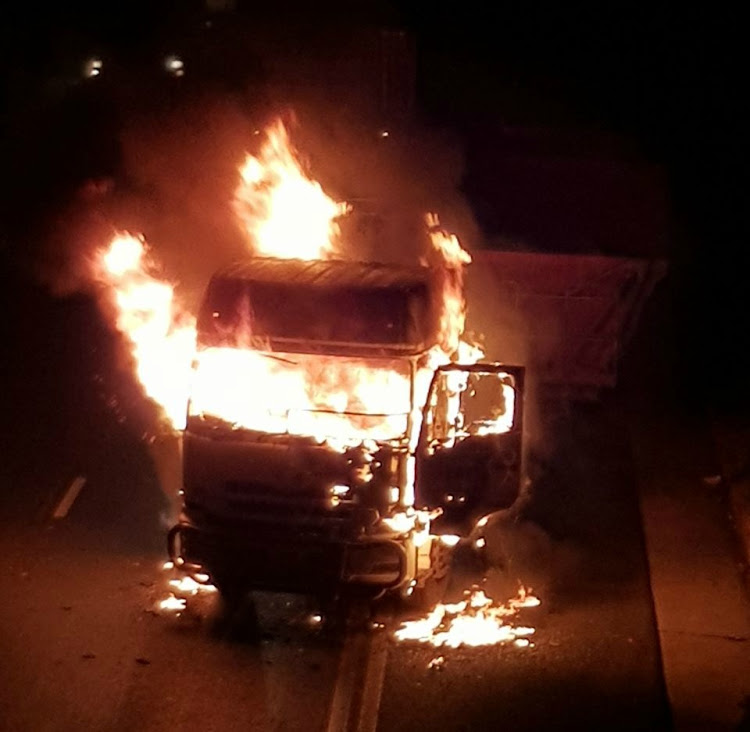 Nearly 40 truck drivers have been arrested in KwaZulu-Natal during a department of home affairs operation in the first week of July.

This was revealed by deputy minister Njabulo Bheka Nzuza during his budget vote on Wednesday.

Nzuza said the operation was conducted at the Mariannhill and Tongaat Toll Plazas between July 1 and 7.

"We arrested 39 foreign nationals who were driving trucks without permits and legal status to be in the country. One employer has already been charged and more arrests are imminent," the MEC said.

Nzuza said the department is trying to curb the appetite of employers to employ undocumented foreign nationals the name of profit.

"They must know that when they break the law and employ illegal immigrants they will face the consequences, and our inspectorate unit will leave no stone unturned," he said.

‘If we in SA torch their trucks, they’ll torch ours’: Zulu king

If South Africans keep torching trucks driven by foreign nationals, there is a chance the same thing will happen to local drivers when they cross our ...
News
2 years ago

He said the major reason why employers do this is because they want to maximise their profits by abusing foreign nationals, paying them below market-value salaries because they know they are in the country illegally.

"This can no longer be allowed to continue. We will fight the corruption that allows people and goods to enter the country illegally," he said.

Nzuza's comments come in the wake of a wave of attacks on trucks and drivers which have left several people dead and caused at least R1.2bn in damages to vehicles and cargo, according to the Road Freight Association (RFA).

The N3 Toll Concession, a private company that manages the road, said 50 vehicles had been torched on the highway since April 2018.

TimesLIVE previously reported that a landmark case for the trucking industry related to the hiring of foreign national truck drivers would be heard on July 18.

While millions of South Africans are set to celebrate the birthday of Nelson Mandela on July 18, a landmark case for the trucking industry will be ...
News
2 years ago

Last week Zulu monarch King Goodwill Zwelithini weighed in on the controversial topic, condemning attacks on trucks and making an impassioned plea for the violence to stop.

“These things are shocking because we have never seen this before ... That, if people are demanding service delivery, they must damage property. I want to tell you, and I won’t be shy to say that, you’re also part of burning trucks on the N3.

“Even if there are foreign nationals who are here in the province, you are also implicated. Stop this because it is damaging our economy. Not only in this province but the whole country."

Zwelithini had been addressing his subjects at an imbizo in Ulundi in northern KZN.

“Go and ask people to stop this on the N3 [freeway]. Don’t think that the N3 is yours alone," he urged.

According to police figures, at least 74 trucks were set alight across the country between January and June this year.

With dozens of truck drivers killed or injured, and R1.2bn in damages to trucks and cargo, motorists have now been warned to avoid travelling on the ...
News
2 years ago

At least three trucks were torched at a depot in Balgowan in the KwaZulu-Natal  midlands, while another caught alight after its brakes failed at the ...
News
2 years ago