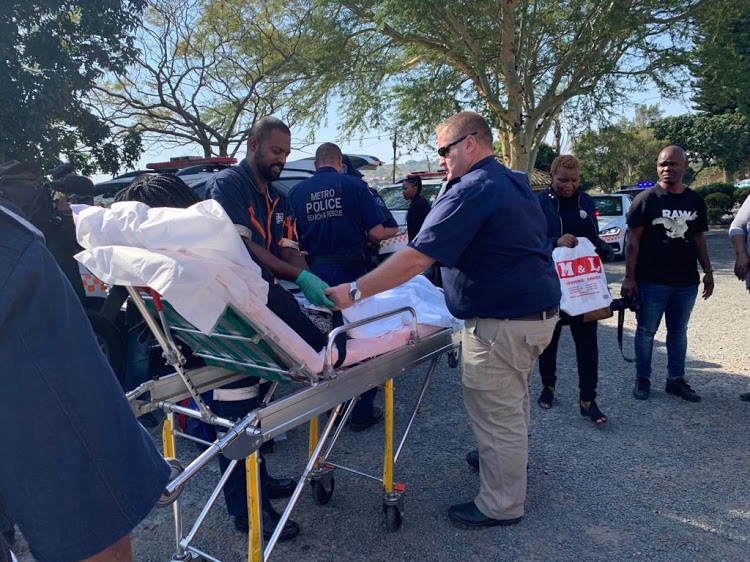 A teacher receiving medical treatment after inhaling an unknown gas at a school in Umlazi on Monday.
Image: Jackie Clausen

A teacher is in critical condition and more than 50 pupils have been transported to local hospitals after they inhaled an unknown gas at Vukuzakhe High School in Umlazi, south of Durban.

Paramedics were called to the school on Monday after, according to teachers and pupils, a small unknown substance exploded and was inhaled by a number of pupils.

Paramedics and Teachers search the area where an “mysterious substance” emitted a gas which caused pupils to have seizures at a school in Umlazi @TimesLIVE pic.twitter.com/v1G5dZgXQ5

It was initially reported that the gas was inhaled by three children at a creche, but it has now been confirmed that the incident occurred at a high school.

The three pupils were first transported to a nearby clinic. When paramedics got to the school they found teachers and pupils complaining about itchy throats, burning eyes and a shortness of breath.

"At this stage we have had multiple patients collapsing. Our Lenmed One helicopter is on its way to transport a teacher who sustained some quite critical injuries as a result of the inhalation," said Rescue Care paramedics spokesperson Garrith Jamieson.

Jamieson said that the chemical substance and its source were unknown but fragments of it were handed over to police on the scene.

Rescue care paramedics treat a 4th child who collapsed after inhaling an unknown substance at a school in Umlazi @TimesLIVE pic.twitter.com/bOy830K43F

Provincial education spokesperson Kwazi Mthethwa said: "We are aware of the incident. We are not sure what the cause of it is but we will be investigating. We are glad to hear the pupils are receiving medical attention. We will be looking into this because it is a serious matter."

A two-year-old girl has died, and two young boys were injured, after their house caught fire in an informal settlement in Durban, KwaZulu-Natal, ...
News
3 years ago

The parents of three children - two siblings and a friend all younger than 10 - are in mourning after the youngsters drowned at an abandoned illegal ...
News
3 years ago