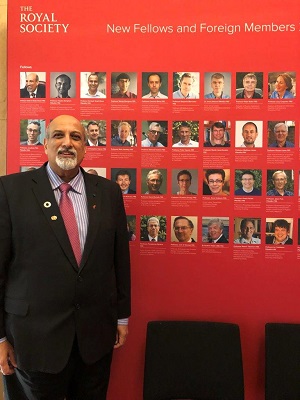 Prof Salim Abdool Karim has become a fellow of The Royal Society by signing 'the book', which was signed in 1660 by Sir Christopher Wren and contains the names of many of the world's greatest scientists.
Image: Supplied

SA’s leading Aids researcher and scientist, Prof Salim Abdool Karim, was inducted on Friday as a fellow of the prestigious science academy the Royal Society.

The London-based Royal Society was established in 1660 by royal charter and has included many of the world’s leading scientists over the past four centuries, from Isaac Newton and Charles Darwin to Albert Einstein and Stephen Hawking.

Fellowship of the Royal Society is awarded to an individual who has made a “substantial contribution to the improvement of natural knowledge, including mathematics, engineering science and medical science".

Abdool Karim joined about 40 leading scientists globally who were inducted as fellows of the oldest academy at a ceremony in London. He is the director of the Centre for the Aids Programme of Research in South Africa (Caprisa), and Caprisa professor of global health at the Maliman School of Public Health at Columbia University in New York.

Abdook Karim is pro-vice-chancellor (research) at the University of KwaZulu-Natal, and one of the three current fellows of the Royal Society.

On his return from the induction on Monday, Abdool Karim said the "enormity of the occasion of the Royal Society hits you when you have to go up during the induction to sign ‘the book’”.

This is the same book that was signed back in 1660 by Sir Christopher Wren and others who founded the Royal Society. It has signatures of many of the world's great scientists.

“I felt truly humbled to be in such august company — and I know that I could never have achieved this without the amazing people that I work with, both in Caprisa, and our many collaborators,” said Abdool Karim.

Abdool Karim is widely recognised as a visionary whose leadership was hailed in a 2014 Nature Medicine article as “one of South Africa’s undisputed leaders in clinical research”, and has been credited with turning around a “moribund” Medical Research Council with “visionary leadership.”

He chairs both the UNAIDS Scientific Expert Panel and the World Health Organisation (WHO) strategic and technical advisory group on HIV, and is also a member of the WHO TB-HIV task force.

Abdool Karim is also an elected member of the US National Academy of Medicine and the American Academy of Microbiology. His many previous awards include the African Union’s Kwame Nkrumah Continental Scientific Award.

In October 2017, he, together with his wife, Prof Quarraisha Karim, an NRF A-rated scientist and infectious disease epidemiologist, were awarded the esteemed Institute for Human Virology Lifetime Achievement Award for exceptional public service for their contribution to the global Aids response.

A daily dose of powerful anti-HIV medicine helped cut the risk of infection with the AIDS virus by 49 percent in intravenous drug users in a Bangkok ...
News
8 years ago